Argentina wins the 2022 World Cup after defeating France
The Argentine national team was crowned champion of the Qatar World Cup 2022 after defeating its French counterpart, by penalty shootouts, by four goals to two in the match that brought them together, this evening, Sunday, at Lusail Stadium, after the end of the original and extra time, in a positive tie with three goals for both teams.
Last Update: ، 2023/01/29 Time 05:17:20
Latest News:

President Hadi receives the US Special Envoy to Yemen 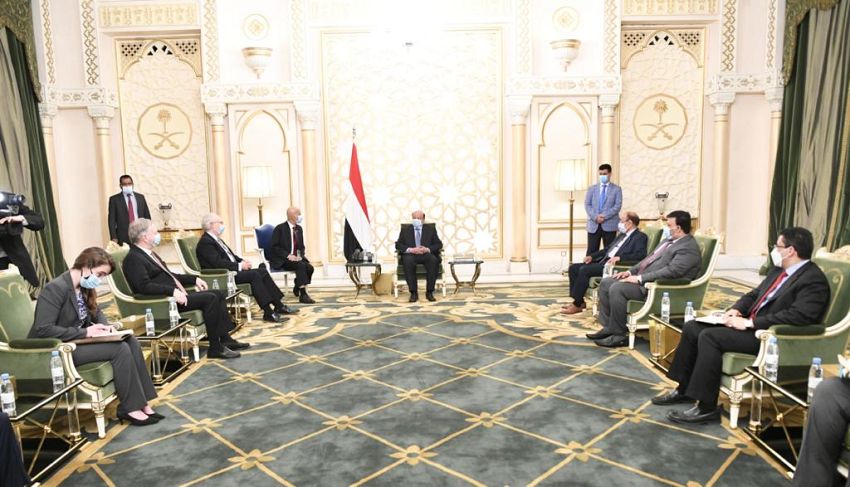 President Hadi welcomed Mr. Lenderking, promising him all support to ease his mission aiming to achieve peace. He stated that he is very keen to make peace that Yemeni peoples are looking forward to and many sacrifices extended and concessions offered to realize in order to stop bloodshed, achieve security, stability for the Yemeni people and Yemen's unity. Peace that is based on the three terms of reference and UNSCRs first and most 2216.

The President blamed the insurgent Houthi militia and its backer, Iran, for blocking peace efforts, dishonoring its obligations under the reached agreements, most recent of all Stockholm Agreement. He stated that Houthi militias have not only failed to meet their obligations, but rather they went far targeting innocent civilians, besiege the governorate of Marib, using Iran-made missiles and drones to assault the civilians and IDPs in Marib, besides carrying out attacks on the civil facilities in the Kingdom of Saudi Arabia, the latest of such attacks, targeting Abha airport.

The President of the Republic said" We do sense that the new American administration is more familiar with Yemen's affairs through their supervisory over the power transfer in Yemen under which the GCC's Initiative was established in cooperation with the brethren in the GCC's member states, those efforts resulted in an inclusive national dialogue culminated in a draft of the new constitution of Yemen which drafted by all political parties and constituencies of the Yemeni society".

Hadi stated that Yemeni-American relations are strategic and deeply rooted, shared common interests in different spheres including fighting terrorism, Yemen's security, stability and unity, protection of the water passages and international marine lines, countering the Iranian interventions in the region. He underscored the importance of the USA support for Yemen to get rid of challenges it has been facing and ensure successful implementation of Riyadh Agreement in full to unite the efforts to counter the insurgent Houthi militia.

For his part the American envoy expressed pleasure with the President reception, recalled his previous meetings with him, his visits to Aden and Sana'a during the Conference of the National Dialogue.

Lenderking confirmed the US support for the legitimate Yemeni government and for the allies in the Kingdom of Saudi Arabia against the attacks by Houthi militia.

He said" We do agree with your description of the destructive role of Iran in Yemen that only resulted in further tensions, conflict, instability, however, we are working on establishing peace, to reach permanent agreement to stop the war in collaboration with our partners to maintain Yemen's unity, security and stability, in cooperation with the efforts of the UN envoy to Yemen".

The Director of the Republic Presidency Office Dr. Abdullah al-Alimi and the Minister of Foreign Affairs and Expatriates were in presence.