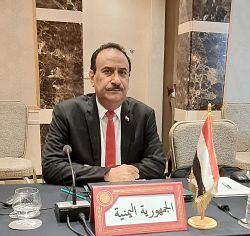 The violations that the Houthis have committed against human rights are unprecedented in Yemen's modern history, the country's Human Rights Minister, Mohammed Askar, said in a dialogue seminar in Cairo on Friday.

The seminar was organized by Al Ahram Al Arabi weekly and chaired by the magazine's chief editor Jamal Al-Koshki in the Egyptian capital city.

"The militias violated the International Humanitarian Law and the persons who have been killed since the start of their coup d'état (in early 2015) number 11251 including 1080 children and 684 women," said the minister. In 2017 the human rights ministry recorded the killing of more than 500 civilians including women and children and eight journalists, he said.

"Journalist Yahya al-Jubeihi was sentenced to execution in an illegal 10-minute trial that lasted for 10 minutes at the longest."

"Kidnappings and arbitrary detentions in this year numbered 1930, of which 400 cases are forcible disappearance," the minister goes on.

He said: "Still the militias are detonating the houses and mosques of oppositionists, in addition to the storming, robbing and forcible closure of business stores." The militant rebels have multiplied the rate of their recruiting of child soldiers by 10 times the past years, he said.

The minister noted that Yemen's war "was not the government's choice but the imposing of the putschists." He said: "The rebels forced the government to defend its people and their legitimate choice and aspirations for a federal modern state, as manifested in the national stakeholders' unanimous approval of the outcomes of the National Dialogue Conference (held in 2013-2014)"

"The Yemeni people refuse to be ruled by backward militia aligned with regional powers that pursue anti-Arab goals."
The minister said that "nevertheless, the government has offered concessions in three UN-sponsored peace talk rounds with the militias and showed its openness to all the proposals from the UN special envoy Ismail Ould Cheikh Ahmed."

He said: "The government accepted the envoy's proposal of the militias' handover of the Hodeidah Red Sea port and city to a third neutral party, collection of the revenues to the government, in return for the government's resumption of salary payments to all state employees."

The rebels rejected that proposal, like the previous ones. "Which shows the lack of intent for peace."

The minister said "the Yemeni government is acting responsibly toward its people and is seeking a lasting genuine peace, whereas the militias feel no obligations and show no care toward the people."

"The government , backed by the Saudi-led Arab coalition, has regained 80% of the Yemeni land, changing the equation to the disfavor of Iran's influence ambitions."