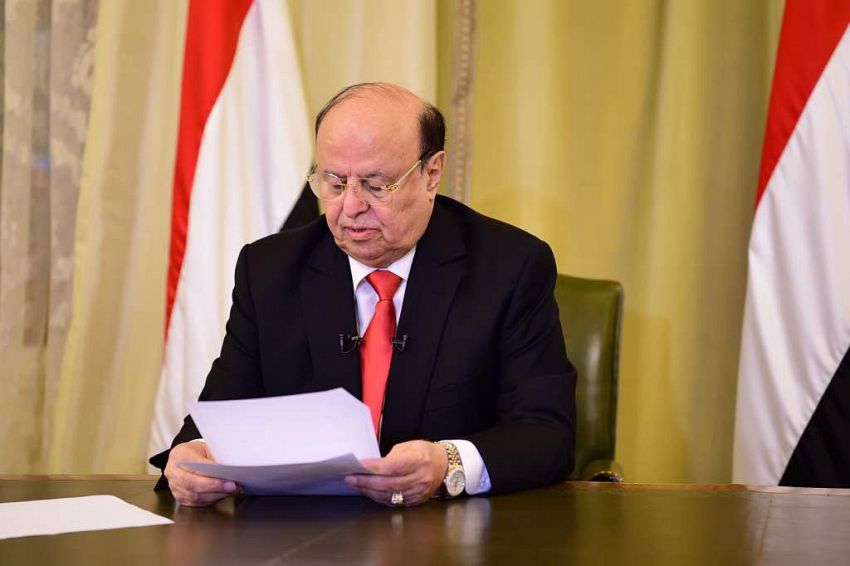 ADEN - SABA
Yemen's President Abd-Rabbu Mansour Hadi called on Saturday for an urgent implementation of the December 2019 Saudi brokered power-sharing Riyadh Agreement between his government and the Southern Transitional Council in order to unify the ranks against common threat of Houthi militia in the north.

In an address to the nation on the eve of the 59th anniversary of the 26 September Revolution against the ancestors of Houthi militia, the Imamite theocratic, racist rulers, Hadi said, "The Riyadh Agreement is a roadmap to unify the ranks and (its) enforcement must be today, earlier than tomorrow, given that it is a guide to bind us together to face the threat that surrounds everyone."

Hadi said, "The pages of our history and testimonies of the world's freemen and intellectuals, have recorded to us a lot of knowledge on the backwardness and bigotry of the racist theocratic Imamite reign against whom the glorious 26 September Revolution rose up."
Despite all those records and testimonies asserting the brutality and horrific nature of the Imamite, Hadi said, many [Yemenis] were not fully cognizant what it is exactly like until the long lurking remnants of racist dynastical Imamites made the jump again to our present, seized the country's capital and invaded its cities in this same month of 2014.
"The return of this vengeful dynastical gang in the present time has betrayed to the world their catastrophic danger to our people, the region, the world and the international peace and security."
Hadi said the Houthis as an armed group are seeking to "impose themselves by the power of weapons instead of freedom, democracy, and peaceful exchange of power."

They have also become "exposed as a dynastic group that glorifies one bloodline over an entire nation, as a religious group that believes in the divine right to rule over Yemen, as a sectarian group that seeks to divide Yemen along a loathsome sectarian fault line and as thieves who want to monopolize the livelihood of the Yemeni people for the sake of their criminal militia."

Hadi said Yemen has been suffering immensely for seven years and the damage has impacted all aspects of life at the hands of this militia which wreaked all the havoc.

"What we need to recognize and realize without a doubt is that deliverance from this militia won't be materialized to our people without the sufficient struggle to end this nightmare like our brave forefathers did," he said.

"Every voice directed against this group is our voice, every hand that resists this Houthi militia is our hand, every gun defending the homeland against this militia's messing is our gun," he said.

"We must unite to force them to heed the calls for peace," he said.

Hadi said the Yemenis have no choice but to restore their state and support it. "Even our regional brotherly neighbors and the free world are all invited to support us to rid our people and the word of the entity most harmful to humanity, peace and coexistence."

Hadi said, "There is no doubt that our country today is going through overwhelming challenges and conspiracies. But the greatness of nation lies in their ability to withstand."