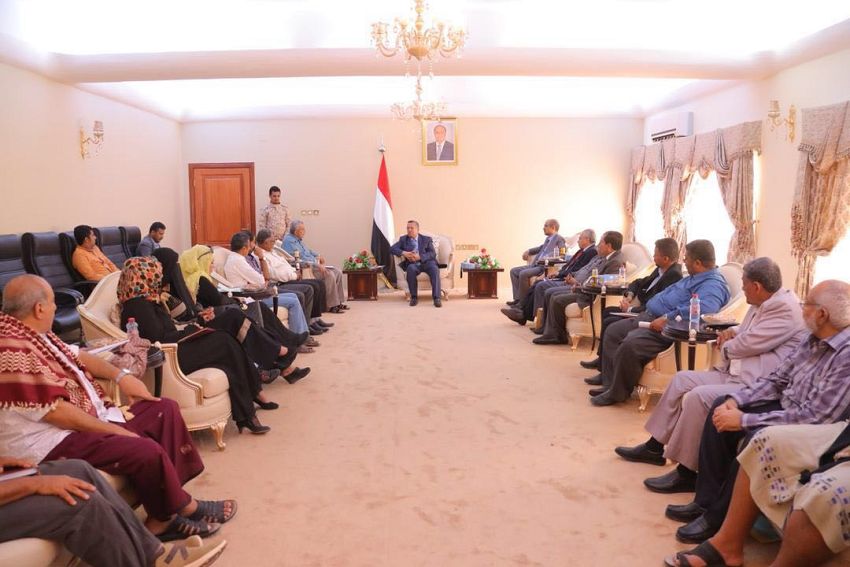 ADEN-SABA
Prime Minister Dr Ahmed Obeid Bin-Dagher said:" We wouldn't all 1986 bloody events to be repeated in Aden once again. We'll never tolerate turbulences in Aden… Aden had been, and it must be remained a political, developmental and economic hub of the whole Yemen".

The Prime Minister advised the attendees that it isn't in the interest of Aden and its population to disturb security and stability in the promising seaport city." Aden has been offered a historic chance to be a temporary capital of Yemen, such opportunity is still existing and mustn't be missed", said Bin-Dagher.

The Prime Minister blamed some political groups who are trying to agitate the public in order to serve their own agendas that have nothing to do with Aden's residents' interests. Some people have been attempting to campaigns on false arguments and unfounded claims. He cited Houthi militia's protests and against the national unity government under pretext of lighting fuels subsides."

The Prime Minister not that the ongoing fighting in Taiz is for protecting Aden and not only for Taiz alone.. national cause can't be divided.. relinquishing fighting in Sa'ada earlier has been a key reason for the troubles created by Houth rebellious militia that Yemeni people have been facing now all over the county.

The Prime Minister blamed Houthi militia for looting 22 billion Yemeni Rial (YR) from the Pensions Fund of retired military servicemen and four more billion YR from Ministry of Interior." As a result, the government has started to re-build the military and security institutions from scratch", said Bin-Dagher.

The Prime Minister foretell the residents of Aden that security plan would be launched over the next couple of days, first phase, in the districts of Khour Makser and Attowahi.