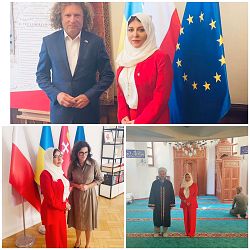 Aden - Saba
The Presidential Leadership Council, headed by His Excellency President Dr. Rashad Muhammad Al-Alimi, Chairman of the Council, held a meeting today, Tuesday, in which it continued to discuss the priorities of administrative, institutional and service reforms in the country.

The meeting was held in the presence of members of the Council, Aidarous Al-Zubaidi, Abdul Rahman Al-Muharrami, Dr. Abdullah Al-Alimi, and Othman Majali, and through video communication, Faraj Al-Bahsani, while Sultan Al-Arada and Tariq Saleh were absent with the excuse.

At the beginning of the meeting, the Council heard from the Minister of Foreign Affairs, Dr. Ahmed bin Mubarak on the developments of contacts aimed at extending the humanitarian truce, and obliging the Houthi militia to implement their relevant commitments, including opening the main roads in Taiz Governorate, and paying the salaries of employees from the revenues of Hodeidah ports .

The council also reviewed reports on the situation in Shabwa governorate and a number of governorates, and directed the concerned authorities in the government and local authorities to take the necessary measures in the security and service aspects.

In this context, the Presidential Council listened to a new briefing from the Chairman of the Security and Military Committee, Major General Haitham Qassem Taher, on the developments in the workflow of the committee, and the requirements for its support to fulfill its tasks in preparing and adopting appropriate perceptions and policies to achieve security and stability, and to ensure the integration of the armed and security forces.

The council also discussed the course of reforms in a number of service and economic sectors, including the telecommunications sector, the situation of the judiciary and ways to enhance the independence of the judiciary, judicial institutions, and law enforcement agencies.