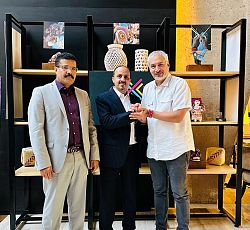 President Hadi: We always work for the sake of peace

ADEN-SABA
President Abd-Rabbo Mansour Hadi has said that they always work for peace and seize every available opportunity for realizing peace admired by Yemeni people and within "our historical responsibilities towards Yemeni people for alleviating their suffering and in response to international community efforts for peace."

"We have participated in all peace rounds and made many concessions and we went to Sweden with hand extended for peace as we earlier did in Geneva, Biel and Kuwait for avoiding bloodshed and normalizing life and realizing security and stability across the homeland," said President Hadi in a press dialogue with the Egyptian-based al-Ahram al-Arabi Newspaper on Thursday.

He stressed realizing peace and stability on the bases of the three references; the GCC Initiative, the outcomes of the National Dialogue Conference and the UN related resolutions led by Resolution 2216.

He confirmed that the repercussions of the war triggered by Iran-backed Houthi rebel militia have left huge damages in Yemen; on the homeland and on society and innocent of unarmed people, children and women who have been killed, injured and displaced.

"To overcome this and to limit its aftermaths after liberating the majority of the homeland, we work hard within our responsibilities towards the Yemeni people for ending their suffering caused by Houthi rebel militia and we work- by all capabilities and resources- to face livelihood and service conditions, normalizing security situations and fighting all forms of terrorism in difficult and complicated conditions," he said.

He pointed out that the national army forces have taken full control of Hodeida Province and have been able to expel Houthi militia from the center of the city and liberate the port of Hodeida but the army preferred giving a chance for handing it over peacefully via the United Nations' mechanism to implement its resolutions peacefully for protecting people, the city, its port and the state infrastructure.

"We have got clear texts from Stockholm agreement based on the international and Yemeni law and are in general support reinstating the government and imposing its grip on the city," he said, confirming that the international will is under a real test for implementing its resolutions and commitments on handing over Hodeida.

"No doubt the question today lays in rebels' respond to peace and their implementation of agreements. If these efforts fail, we will not let any inch in Yemen out of the state's control," he said.

He talked about the government's effort for normalizing conditions and regaining life in the liberated provinces, saying it is not easy to build a state from a zero-step and rebuild all administrative and military structures after being fully destroyed.

He added that they rehabilitated all institutions and established a complete security organization "from nothing" but they still face very difficult economic crises and are dealing with them in cooperation with brothers in the Saudi-led Coalition.

He confirmed "Arab Nation has to unite its efforts and capabilities for facing challenges it faces and improve the nation's status under dangers threaten our Arab region and facing lesions of terrorism and extremism which exhausted our peoples and capabilities."

He praised efforts of Egyptian President Abdel Fattah el-Sisi in protecting security and stability of Egypt and dealing with different obstacles and problems wisely despite disturbances facing Arab region.

He also praised Egyptian support to Yemen within the Saudi-led Coalition and the Military Firmness Storm for reinstating Yemen's legality, saying he has brotherly relations with President Abdel Fattah el-Sisi embodying the joint destination of Arab nation.

He talked about his house-arrest imposed by Houthi militia and how he got rid of Houthi grip saying the rebel forces have never expected the Firmness Storm or any Arab interference for the interests of the legality.

"When I got rid of the house-arrest and headed to Aden, they (the coupists) bombarded the Republican Palace by jets, I was communicating with the late Prince Saud Al Faisal (the Saudi Foreign Minister then) and the Ambassadors of the GCC came to Aden and by arrival of six ambassadors, the gulf position has been clear," he explained.

If there was no military inference, Houthi would take control of Yemen and just after several days we would find Iranian jets in the air and then in Yemeni airports but the storm has been a surprise to Houthi militia and Iran.

"I am a military man understand the strategic and long term strategic objectives of Iran and if I have been late for three days, Houthi would arrive in Mahra and Hadhramout because he seized all weapons and equipment and the army has become in their hands," he said.