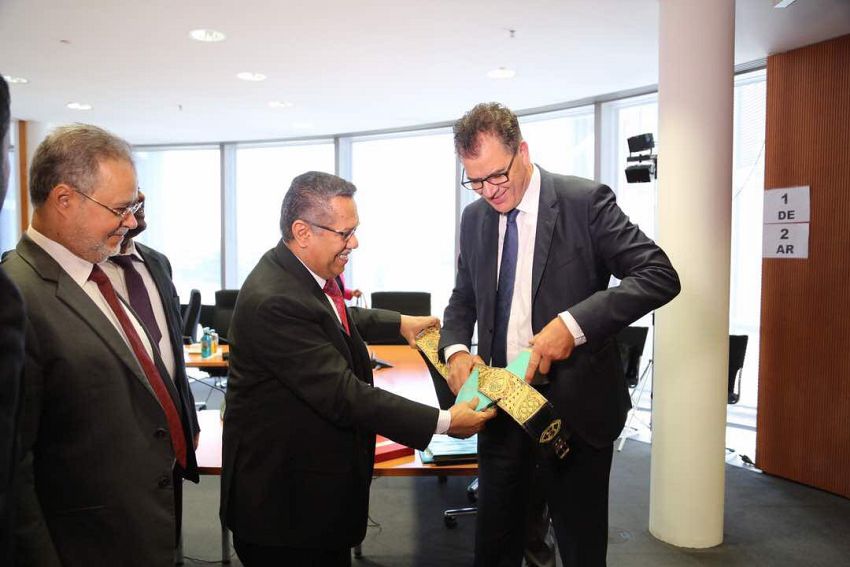 Yemen values positions of friend Germans in supporting political process in the country, said Bin Daghr, noting the government of Germany has pledged of providing € 55 million as development aid to Yemen in 2017 and € 50 million as relief assistance during humanitarian response meeting held last month in Geneva.

"The development projects carried out in Yemen by a number of German institutions, including GIZ, and other international development organizations, have been affected negatively by the coup {Houthi-Saleh Alliance's coup} against the state in September 2014 and even the majority of that projects, which covered Yemen, health, education, water and environment and agricultural and service projects, had completely stopped," he said.

He asserted on upturning the coup and restoring the legal authority to resume service and humanitarian projects even if gradually in liberated governorates, which represent 80 percent of Yemen's territories and inhabited by 60 percent people.

He stressed on tackling reasons of Houthi war since 2004 to 2014 and ended with toppling the state and putting the elected president and his government in house arrest.

"The international community and German friends are responsible to unearth facts on who is the first aggressor as the government went to Geneva and Kuwait talks for realizing peace and signed Kuwait agreement," he said.

He affirmed that the government is still seeking peace in accordance with the three national and international references: the National Dialogue Conference's outcomes, the GCC Initiative and the UN Resolution 2216.

For his part, Müller showed keenness of German government on Yemen's issue.

"Yemen's file is on the top priorities of international meetings of German Chancellor Angela Merkel, and German people stands by Yemen's government and people to end suffering of citizens and rescuing lives of millions of children," he said.