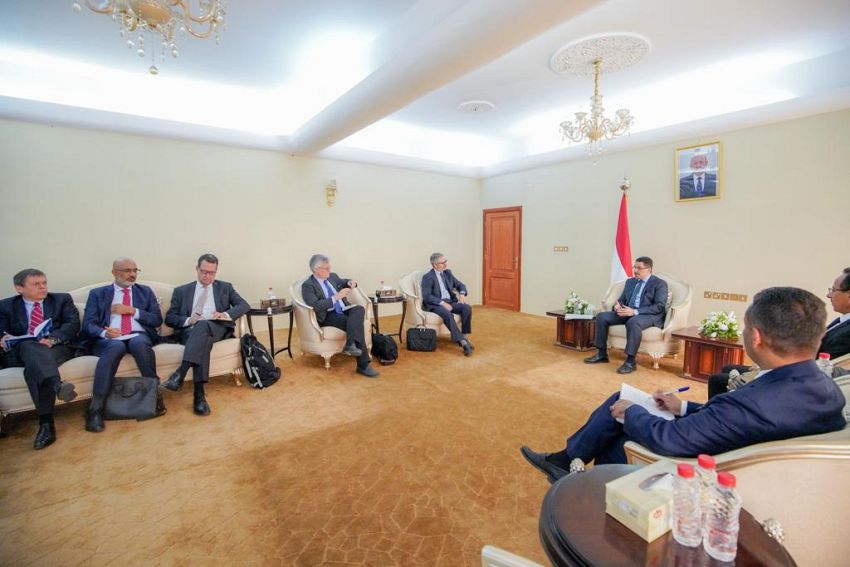 Aden – Saba
Foreign Minister, Dr. Ahmed Awad bin Mubarak, met the US ambassador to Yemen Steven Fagin and the US envoy, Tim LinderKing in a meeting in the temporary capital Aden today.

During the meeting, bin Mubarak praised the attention paid by the US administration to Yemen and the efforts it is making to end the war waged by the Houthi militia against all the Yemeni people and to strive towards establishing a comprehensive and just peace in Yemen, stressing that these efforts are appreciated and reflect the depth and strength of Yemeni-American relations, once again. The Yemeni government's commitment to work closely with the US administration and to do everything possible to end the war, bring peace and end the suffering of all the Yemeni people.

Bin Mubarak valued the US support for Yemen and touched on the importance of supporting Yemen economically, giving priority to development projects and helping to strengthen the work of the Central Bank of Yemen, which will positively affect the economic and humanitarian situation in all Yemeni regions.

Bin Mubarak reviewed the developments of the truce, once again, of the Presidential Leadership Council and the government’s support for all efforts aimed at reducing escalation in Yemen and resuming the political process, stressing that the Presidential Council deals with humanitarian issues with a single standard and a national perspective and aims to alleviate the suffering of all the Yemeni people, while the Houthi militias are the cause of all this suffering that affects all the people in all regions of Yemen. He noted that the Yemeni government has made many major concessions to make the truce succeed, realizing and believing that the most important thing is to lift the suffering whereas the Houthi militia continue to exploit these humanitarian issues and procrastinate in adhering to the truce agreement both with regard to not lifting the siege on Taiz, and their stealing of the Hodeidah port revenues generated by the incoming oil shipments, returns that should have gone to pay the salaries of employees in accordance with the Stockholm Agreement.

He said all this proves beyond any doubt that these militias do not care about the situation of the Yemeni people and are only interested in achieving their personal interests, which is what these militias have continued to do in the absence of real international pressure to hod them responsible.