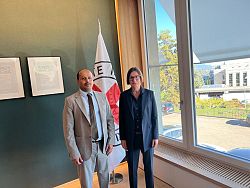 Arman discusses with President of ICRC cooperation with Yemen's government
Minister of Legal Affairs and Human Rights Ahmad Arman discussed Wednesday with President of the International Committee of the Red Cross Mirjana Spoljaric Egger cooperation and coordination between the committee and the government under the humanitarian crisis faced by Yemeni people over Houthi militia's triggered war.

Yemen confirms any UN solutions must be within government powers

"This UN organization, under your respectful council sponsors the peace talks in accordance with the international legitimacy's resolutions," said Yemen's Permanent Representative to the United Nations Ahmad Awadh bin-Mubarak, who recited the Republic of Yemen's release before the Security Council in an open session on the Middle East on Thursday.

He added during the past three years and in every stations of the peace talks, the militias have sought to diminish peace efforts by creating crisis and hindering practices, a matter warned by the government of Yemen repeatedly and your respectful council knows how close we have been for achieving great progress in peace track in Kuwait if not the intransigence and rejection of signing by Houthis during the last minutes.

Bin-Mubarak renewed the government's peace choice based on regaining the state, ending the coup and regaining the security and stability. He stressed that peace will not only realized by efforts of the UN envoy for starting the dialogue but by political pressure on Houthi rebel militia with clear messages that the international community will not allow suffering of the Yemeni people to continue, abducting the state and threatening the international navigation.

He confirmed on giving confidence-building measures agreed upon earlier in Biel Talks priority and focusing on humanitarian domain like releasing kidnapped people and detainees, ensuring influx of humanitarian assistances without interferences or hinder by the militia, and stopping planting mines, which kill future generation and stop recruiting them.
He talked about the continuous deterioration of humanitarian situation over war fed by foreign agenda.

" What is happening daily of random shelling by the militias on populated cities in Taiz, Lahj, Jawf, Mareb and Baidha', in addition to snipping civilians, most of them from women and children, especially in Taiz, are acts must be denounced and their perpetrators must be held accountable," he said.

He demanded the international organizations operating in Yemen to expand their activities in all Yemeni areas.