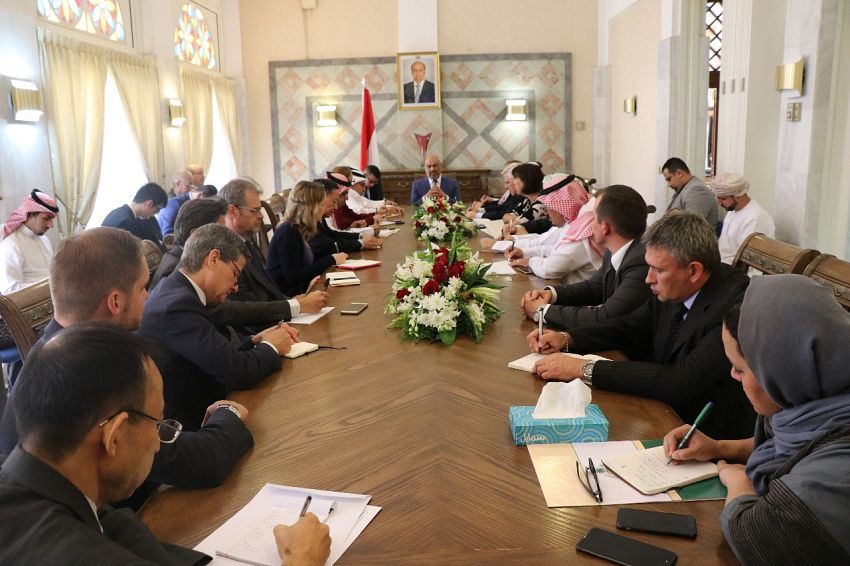 RIYADH-SABA
Foreign Minister Khalid Alyemanymet in Riyadh on Monday the ambassadors of the G18 group of nations sponsoring political process in Yemen to discuss resuming peace talks between the government and the Houthi rebels.

Alyemany stressed the government's commitment to support the UN Secretary General's Special Envoy for Yemen Martin Griffiths and provide all facilities for the completion of his mission.

He pointed to the danger of the Houthi militia's recent escalation by attacking Saudi oil tankers south of the Red Sea and Bab al-Mandeb strait.

The government is open and ready to participate effectively in any political consultations with clear objectives, frameworks and mechanisms called for by the United Nations, such that the Houthi militia are not given the chance to use the consultationtime to play delay tactics and other maneuvers that prolong the war and, hence, the suffering of the Yemeni people.

He said that the government welcomesthe UN envoy's proposals concerning the withdrawal of Houthis from the city of Hodeidah which contributes to implementing the UN Security Council resolution 2216 that provided for ending the Houthi coup of 2014 and withdrawal of the armed militias from cities and government institutions.

But the Houthis have proved their determination to carry on with the war and rejection ofthe political process, he said. He said that they stubbornly refusedthe envoy's proposal with withdrawal.

"The government, based on its sovereign right and constitutional obligations, will continue its efforts, both militarily and politically, to restore the sovereignty of the state over the province of Hodeidah and its ports and all areas of the West Coast, and to alleviate the oppression sufferedby the people of these areas," he said. Once the government collects the revenues it will be able to pay the salaries of public servicemen, overdue for years now.

"The government's move to liberate Hodeidah aims to end the interventionsof Iran by providing its Houthi proxies with various weapons, including ballistic missiles," he said.

He noted that there are serious legal repercussions for any continue continued control of the ports and coasts by the Houthi militia;that poses a real threat to the flow of global energy and trade in one of the world's most important shipping lanes"
On the humanitarian side, he pointed out that the humanitarian aid is delivered far ahead of military offensives. He stressed that the government, the Arab Coalition countries especially Saudi Arabia, the UAE, Kuwait and other countries including from outside the Coalition have increased their aid donations to Yemen.

The Coalition issues daily permits for an average of five vessels to enter the port of Hodeidah carrying commercial goods and humanitarian aid.

He stressed the need to take advantage of the capabilities of all sea, land and air ports in Yemen including the ports of Aden and Mukalla, and the ports of neighboring countries to deliver humanitarian support and commercial goods to Yemen,
The ambassadors expressed their commitment to a UN overseen settlment as the only track to restorepeace to Yemen. They expressed their readiness to provide all facilities and support to this end, praising the Yemeni government's positive attitude towards the peace initiatives of the United Nations.