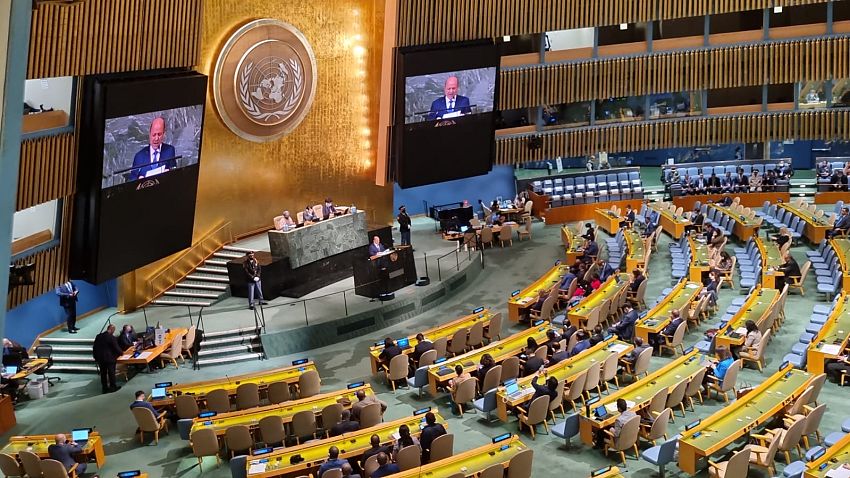 NEW YORK - SABA
His Excellency President Rashad al-Alimi, Chairman of the Presidential Leadership Council (PLC) called on the International Community (IC) to make a drastic change in its long-standing manner in dealing with the Yemeni crisis, put an end of the world's worst humanitarian suffering that Iran-backed Houthi militias have produced.

He said " The PLC has opted for peace approach since the first day in order to put an end of the humanitarian suffering, eliminate the coup, restore the State and go on establishing freedoms, human rights, equal citizenship, empower woman and youths to contribute to building up sustainable peace".

The President blamed Houthi militias for prolonging the conflict, worsening the Yemeni peoples' suffering by blocking all regional and international peace proposals and efforts.

" Since the early days of the Yemeni crisis we sought for peace but the militias have never honor any agreement it has signed on.
We engaged in negotiations with the militias several times, starting on the eve of the militias' taking over the capital Sana'a in September 2014, to Geneva, Kuwait's consultations, Stockholm and the ongoing UN-brokered truce, during which we lost 300 martyrs and more than 1000 injured due to the militias' violations ."

He went on explaining" Today, we are approaching the end of the humanitarian truce, just only a week is left. Here the PLC would like to remind the IC that the government has fulfilled its all obligations under the truce agreement, operating airways flight to Sana'a airport regularly, easing entry of the ships laden with fuels to Hodeidah seaports in a bid to alleviate our peoples' suffering. While the terrorist militias have continued to close the passageways to Taiz and other governorates, refuse to pay the public service employees and reject to release prisoners , it seeks for any pretext to foil the truce, block international efforts aiming to renew it and build- up on to achieve the comprehensive peace that ally Yemeni peoples are desperately looking for."

He added saying" The humanitarian truce has made it very clear that we're really lacking a genuine peace partner, it has also further enhanced the Yemenis conviction that is very hard to come sustainable truce with an armed sectarian group unless there is decisive deterrence".

The Chairman of the PLC continued " We do confirm in this regard the PLC's principled stance that we welcome renewing the truce provided that it should not be at the expense of the Yemenis' future, it should not offer the militias more time to prepare for new cycle of bloody war".

Al-Alimi urged the IC to support the legitimate Yemeni government's efforts to establish peace, cherish freedom values and civil coexistence saying " There is no better way to help the Yemeni people than sustaining the legitimate government's efforts to establish freedom values, peace and civil coexistence".

The Chairman of the PLC called on the IC to condemn the Iranian blatant interferences in Yemen and enforce the punishments upon the Iranian regime under the UNSCRs in relevance about the ban of weapon supplies that Iran has continued to provide Houthi militias with including ballistic missiles and drones that are used in carrying out terrorist actions against the civilians in Yemen and the neighboring counties.