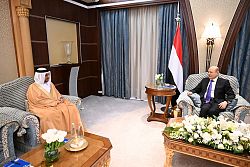 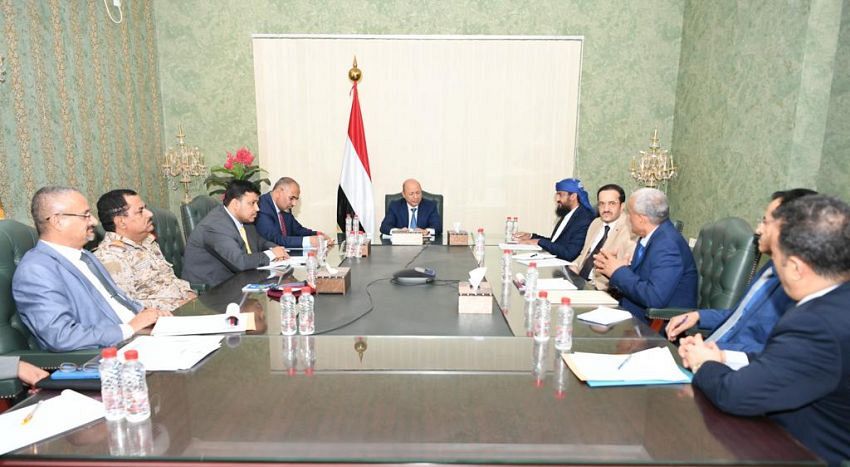 Aden-Saba
The Presidential Leadership Council, headed by His Excellency President Dr. Rashad Muhammad Al-Alimi, Chairman of the Council, continued to discuss the local developments, and the required reforms in the administrative, institutional and service fields, in the presence of all its members, Aidarous Al-Zubaidi, Abdul Rahman Al-Muharrami, Dr. Abdullah Al-Alimi, and Othman Majali, and via video conference Sultan Al-Arada, Tariq Saleh, and Faraj Al-Bahsani.

In this context, the Council discussed a proposal to form a Higher Committee for Sovereign and Local Revenues, and another for development and reconstruction projects, concerned with adopting the state’s revenue vision, enabling it to manage all its resources, and supervising and following up on absorbing support and aid allocated to development and reconstruction projects in the country.

The formation of the supervisory and technical committees reflects the directions of the Council to carry out further administrative and financial reforms, and to fulfill its local and international obligations, including accelerating the absorption and implementation of a package of projects funded by the brothers in the Kingdom of Saudi Arabia, for the benefit of citizens, and improving services and livelihoods in Aden and other governorates.

The council also discussed, in a separate item, administrative and service reforms in a number of governorates and took appropriate measures and decisions, in the context of its relentless efforts to normalize the situation, improve services and enhance the role of state agencies in law enforcement, serving citizens and alleviating their suffering caused by the Houthi militia's war.

The Council also discussed the proposals and arrangements necessary to celebrate the glorious revolutions of the twenty-sixth of September and the fourteenth of October, and to best perpetuate their principles and great goals in the memory of successive generations.

In this regard, the Council agreed on a number of measures necessary to revive these national occasions, which represented a significant transformation in the course of the national struggle against the front rule in the north and foreign colonialism in the south, and put the country on the path of revival, and its ability to restore the momentum of the unity of the revolution in the face of the project of the new imamite. backed by the Iranian regime.