General al-Zubaidi discusses with al-Awadhi situations in Jawf
Member of the Presidential Leadership Council Aidrus al-Zubaidi met Thursday here with Member of Consultation and Reconciliation Authority, the Former of Jawf Governor Sheikh Hussein al-Awdhi discussing with him latest developments in Jawf and suffering of the people there over Houthi militia barbaric practices against them. 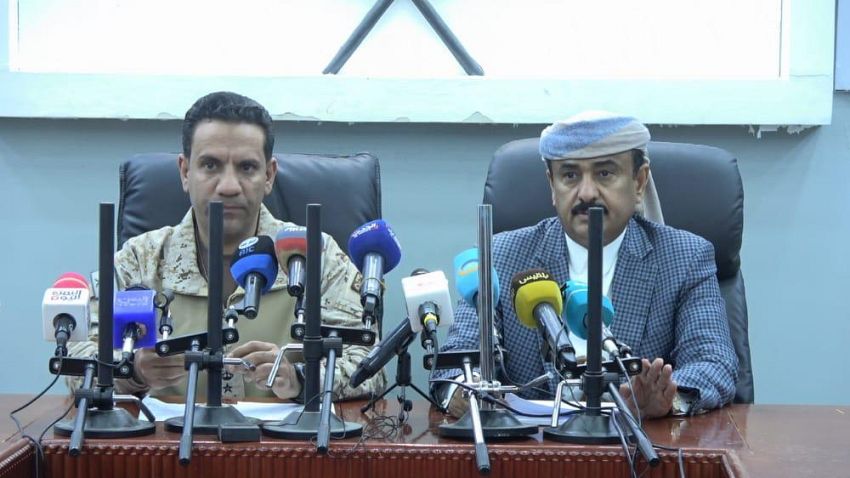 Shabwa - Saba
The official spokesman for the Arab coalition forces, "Coalition Brigadier General Turki Al-Maliki, announced today the launch of the "Operation Freedom of Happy Yemen" on all fronts.

In a joint press conference with the governor of Shabwa, Awad Al-Awlaki, held in the city of Ataq, Al-Maliki said that the operation (Freedom of Happy Yemen) is not a military operation in the purely military sense that is war, but it aims to move Yemen to the stage of development and prosperity, referring to the main pillars of this operation emphasizing that Yemen is a country of history, culture and civilization that deserves a decent life and has many ingredients that have not been exploited yet.

Brigadier General Al-Maliki affirmed the continuation of the operation so that Yemen becomes safe and stable and free from the Houthi militia.

For his part, the Governor of Shabwa, Awad Al-Awlaki, welcomed the delegation of the joint forces of the Arab coalition headed by the official spokesman for the coalition forces, Brigadier General Turki Al-Maliki, stressing that the Arab coalition countries, in the forefront the Kingdom of Saudi Arabia and the United Arab Emirates are true partners in these victories that are achieved on the different fronts.