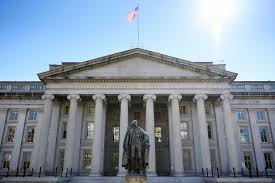 WASHINGTON - SABA
The U.S. Department of Treasury announced on Thursday that it has targeted five elements of the Iran-backed Houthi militia leaders in pursuant to Executive Order (E.O.)13818, which builds upon and implements the Global Magitsky Human Rights Accountability Act.

The U.S. Department of Treasury issued statement reads" In Yemen, the country’s various Houthi-controlled security and intelligence agencies have committed serious human rights abuse, engaging in the prevailing practice of the arbitrary detention and torture of its citizens. Students, women, human rights activists, journalists, humanitarian workers, perceived political opponents, and members of the Baha’i community have been targeted, illegally arrested, and mistreated in detention centers run by these various agencies, the National Security Bureau (NSB), the Political Security Organization (PSO), and the Criminal Investigation Department (CID). Under the direction of their Houthi leaders, the NSB and PSO have been actively committing these abuses since late 2014."

The statement went on saying "As the current Director of the Sana’a CID, Sultan Zabin (Zabin) and his CID officers have arrested, detained, and tortured women under the pretense of a policy designed to curb prostitution and organized crime. In reality, this policy was used to target politically active women who opposed the Houthis, and resulted in numerous reported cases of illegal arrest, arbitrary detention, enforced disappearance, sexual violence, rape, torture, and other cruel treatment utilized by the Sana’a CID against these women.

Zabin was responsible for the implementation of this policy that was used as a tool for repression and violence. Zabin has had direct involvement in acts of rape, physical abuse, and arbitrary arrest and detention of women as part of a policy to inhibit or otherwise prevent political activities by women who have opposed the policies of the Houthis".

For al-Khaiwani the statement cited " Abdul Hakim al-Khaiwani (Khaiwani) was responsible for many detention facilities and security forces, including the Sana’a CID. The illegal arrest, detention, and torture of women conducted by the CID was done so under the ultimate authority of the Houthi Ministry of Interior. Khaiwani currently serves as the Director of the Houthi Security and Intelligence Service".

According to the statement "as the Deputy Head of the NSB, Motlaq Amer al-Marrani oversaw detainees of the NSB, who were reportedly subjected to torture and other mistreatment by members of the NSB while detained. In addition, al-Marrani played a significant role in the arrest, detention, and ill treatment of humanitarian workers and other authorities working on humanitarian assistance and was also found to have abused his authority and influence over humanitarian access as leverage to generate personal profit.

Concerning to Abdul-Qader al-Shami the statement noted that "al -Shami is a Houthi member and the former director of the PSO. Since late 2014, the PSO has been responsible for the regular practice of illegal detention and torture of prisoners, including children. PSO officials were found to have been keeping detainees in undisclosed locations, subjecting them to torture, and not allowing them to communicate with their families, depriving them of their fundamental liberties".