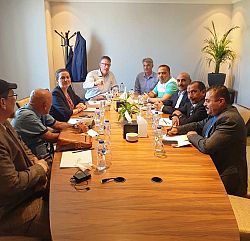 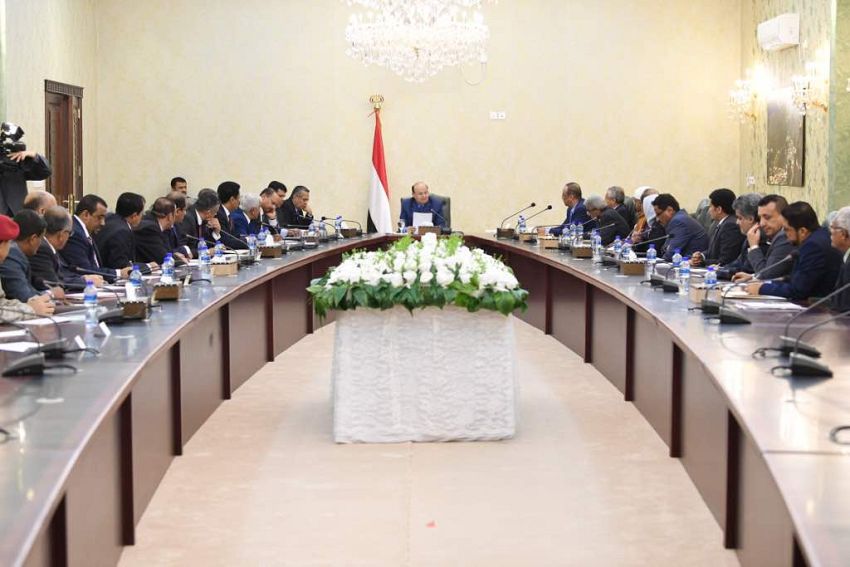 ADEN-SABA
President Abd-Rabbu Mansour Hadi presided over an extraordinary meeting of the Council of Ministers on Wednesday in the interim capital Aden. The meeting, which held with the presence of Prime Minister Dr Ahmed Obeid Bin-Dagher, devoted to discuss the situations and developments in the country.

The President gave a keynote speech in which he said:" As you know that in Ramadan we held meetings with the Custodian of Two Holly Mosques King Salman bin Abdulaziz Al-Saud and His Royal Highness, Crown Prince, Mohammed bin Salman, and recently we met with Crown Prince of Abu Dhabia, Deputy Commander-in-Chief, in the United Arab Emirates (UAE), His Highness, Sheikh Mohammed bin Zayed Al-Nahyan. We agreed on several issues of common interest and that will further boost deep rooted relations with our brethren in the Kingdom of Saudi Arabia (KSA)".

President Hadi cited a number of significant issues he discussed with brothers in the KSA and UAE. Some of these issues are strategic pertaining to future cooperation and partnership and others include necessary demands and services for our country and people in framework of support will touch upon different fields.

The President also touched upon his meetings with the UN envoy to our country Martin Griffith, last meeting was in the city of Jeddah. He reaffirmed the legitimate leadership's and government's clear position about establishing peace that is based on the implementation of the UNSCRs, namely 2216, GCC's Initiative and National Dialogue's outcomes. He emphasized on full coordination with the brethren about this file.

The President urged everybody to refrain from giving statements within this context as it is a matter of sovereignty that presidency and Foreign Ministry are exclusively authorized to talk about.

Talking about the ongoing developments and military advancements have been made by the government's troops alongside local resistance in different fronts including retaking Hodeidah airport, the President stated that the combat military operations are going to go on in all fronts until reaching capital Sana'a and reinstating the State's authorities, with Saudi-led Arab Coalition's support.

President Haid praised Prime Minister's efforts over the past and the progress realized in renormalizing the situations and reinstating basic services. He also noted that some ministers' performance were lag far behind and that is unacceptable.

The Prime Minister and his cabinet's members contributed to the meeting, providing brief presentations about their Ministry's actions, achievements and challenges.

President, vices of president arrive Doha in the fourth leg of their foreign tour