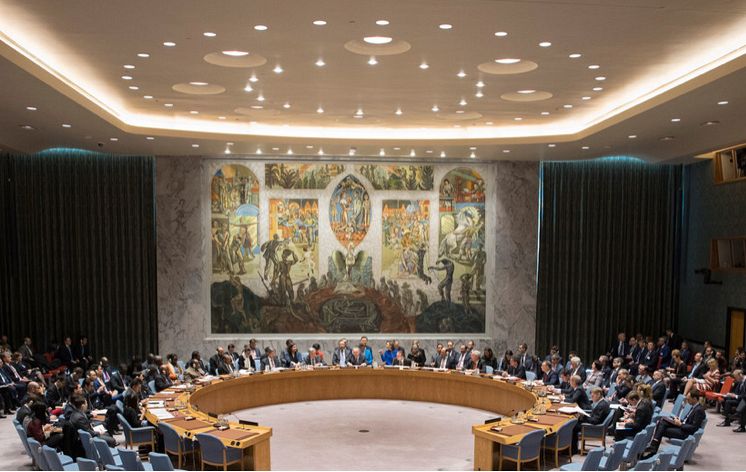 NY-SABA
The United Nations Security Council has called on the Yemeni warring parties, the government and Houthimilitant rebels, to engage in good faith with the United Nations-led process in order to reach a solution for the years long conflict.

The UNSC made the call in a presidential statement at a meeting held today.

The Security Council expresses deep concern about the acute vulnerability of civilians to outbreaks of cholera and diphtheria, in light of acute malnutrition, the threat of famine and the weakness of Yemeni institutions including the health system, and calls upon all parties to facilitate vaccination programmes for affected populations by UN agencies and humanitarian organisations.

“The Security Council expresses grave distress at the level of violence in Yemen, including indiscriminate attacks in densely populated areas, and the impact this has had upon civilians, including large numbers of civilian casualties and damage to civilian objects.

The Security Council calls on all parties to comply with their obligations under international humanitarian law, including to respect the principle of proportionality and at all times to distinguish between the civilian population and combatants, and between civilian objects and military objectives, and by taking all feasible precautions to avoid, and in any event minimize, harm to civilians and civilian objects and infrastructure, and to end the recruitment and use of children and other violations committed against them in violation of applicable international law, in order to prevent further suffering of civilians.

The Security Council calls on all parties to respect and protect schools, medical facilities, and personnel.

The Security Council underlines the need to ensure the security of humanitarian and United Nations personnel.

The Security Council condemns in the strongest possible terms ballistic missile attacks by the Houthis against the Kingdom of Saudi Arabia, with particular concern for the 4 November and 19 December 2017 attacks which deliberately endangered civilian areas. The Security Council reiterates its call on the parties to agree on the modalities for a durable Cessation of Hostilities.

“The Security Council calls on all parties to the conflict to allow and facilitate the safe, rapid and unhindered access for humanitarian supplies and personnel to all affected governorates.

The Security Council further notes with great concern the impact that access restrictions on commercial and humanitarian imports have on the humanitarian situation, and calls on the parties to immediately facilitate access for these essential imports into the country and their distribution throughout in order to reach the entire civilian population.

In this regard, the Security Council calls for the full and sustained opening of all Yemen’s ports, including Hodeida and Saleef ports, and stresses the importance of keeping these functioning and open to all commercial and humanitarian imports, including food, fuel and medical imports.

“The Security Council emphasizes the need to respect the principles of humanity, neutrality and impartiality and independence for the delivery of humanitarian assistance, and stresses the importance of such assistance being delivered on the basis of need, devoid of any political prejudices and aims, and commends the efforts of the United Nations and all humanitarian and medical personnel in Yemen.

“The Security Council also stresses the need for humanitarian assistance to be gender and age sensitive, and to remain responsive to women and children’s differentiated experiences and needs. Women and other groups are particularly at risk in periods of humanitarian crisis and food scarcity.

“In light of the worsening crisis, the Security Council welcomes the United Nations’ 2018 Yemen Humanitarian Response Plan, which requires $2.96 billion to assist more than 13 million people.

The Security Council calls upon Member States to immediately disburse outstanding pledges and provide additional donor support ahead of the upcoming Geneva Pledging Conference for Yemen, hosted by the United Nations together with the Governments of Sweden and Switzerland, and in this regard welcomes the pledge made by the Kingdom of Saudi Arabia and the United Arab Emirates to contribute nearly $1 billion to the UN appeal, and both countries' commitment to raise an additional $500 million from other donors in the region.

The Security Council encourages all Member States to channel their pledges through the UN 2018 Yemen Humanitarian Response Plan as part of a coordinated international response to the crisis.

“The Security Council notes with appreciation the recent announcement of a ‘Yemen Comprehensive Humanitarian Operations Plan’ by the Kingdom of Saudi Arabia-led Coalition, the recent delivery of four World Food Programme cranes to Hodeida port, as well as plans to install four additional cranes in Mokha, Aden and Mukalla ports, and to deposit $2 billion into the Central Bank of Yemen.

The Security Council further notes the intention of the Kingdom of Saudi Arabia-led Coalition to establish an air-bridge to Ma’rib to facilitate the delivery and distribution of aid.

“The Security Council expresses concern about the challenges facing Yemen’s economy. The Security Council notes the Government of Yemen’s announcement of its first budget since 2014 and calls upon the Government of Yemen to develop a transparent budget process, which consolidates revenues and prioritizes spending on salaries for the 1.25 million public sector employees across the country, particularly in the health, sanitation and education sectors.

The Security Council further recognizes the need to strengthen the capacity of the Central Bank of Yemen to develop and implement a transparent national monetary policy.

The Security Council recognizes in this regard that Member States undertaking cargo inspections pursuant to paragraph 15 of United Nations Security Council resolution 2216 (2015) are required to submit written reports to the Yemen Sanctions Committee as set out in paragraph 17 of resolution 2216 (2015), stressing the need for all parties to prevent any adverse effects on the delivery of commercial or humanitarian goods.

The Security Council calls on all Member States to ensure that, if inspecting vessels already cleared by UNVIM, this is done in an efficient and timely manner and in accordance with the terms and conditions of paragraph 15 of resolution 2216 (2015(.

“The Security Council takes attempted attacks by the Houthis against shipping around Bab al-Mandeb, a strategically important shipping passage, extremely seriously and stresses that the continued exercise of navigational rights and freedoms in and around Bab al-Mandeb strait in accordance with relevant international law must be upheld.

The Security Council condemns the use of sea mines by non-nation state actors, including Houthi forces, and expresses deep concern that mines are prone to break free of their moorings and drift into international shipping channels, and thus represent a threat to commercial shipping and sea lines of communication.

The Security Council calls upon all parties to the conflict to abandon pre-conditions and engage in good faith with the UN-led process, with the meaningful participation of women and other underrepresented groups at all levels, in order to overcome obstacles and reach a political solution to the conflict.

The Security Council welcomes the appointment of Martin Griffiths as Special Envoy of the Secretary-General for Yemen and affirms its support for his Mission.

The Security Council calls on all parties to allow the UN Special Envoy full and unhindered access to all relevant parties in Yemen.

“The members of the Security Council reaffirm their strong commitment to the unity, sovereignty, independence and territorial integrity of Yemen.”