Argentina wins the 2022 World Cup after defeating France
The Argentine national team was crowned champion of the Qatar World Cup 2022 after defeating its French counterpart, by penalty shootouts, by four goals to two in the match that brought them together, this evening, Sunday, at Lusail Stadium, after the end of the original and extra time, in a positive tie with three goals for both teams.
Last Update: ، 2023/02/04 Time 11:22:54
Latest News:

Al-Iryani: Houthis made Yemen a gate for Iranian regional plots 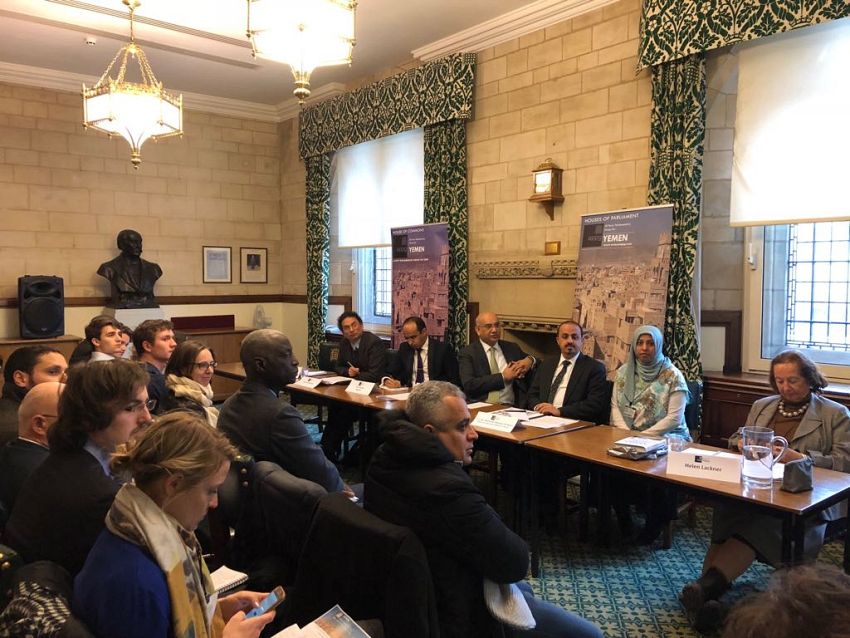 LONDON-SABA
Minister of Information Muamar al-Iryani has said Yemen-under Houthi coup- has become a back gate to Iranian plots for destabilizing the Red Sea region, Arab Gulf and the whole region.

Al-Iryani delivered a speech in activity organized by British Yemen Committee's Head and Member of the Parliament Kith Fas at UK House of Common on Saturday and attended by Yemen's Ambassador to the United Kingdom Yaseen Saeed Noman and a number of politicians, researchers, representatives of concerned international organizations and journalists.

" Let me inform you they {Houthis} only seek to make Yemen a spot for feeding a regional and international conflict threatening the security and stability of the whole region not only Yemen," he said.

"However, we repeatedly call for achieving peace and lifting suffering of Yemenis over these acts that never relate to Yemeni people," he said, adding this clearly proves that the Iran-backed Houthi militia rejects peaceful political settlement sponsored by two UN representatives.

He pointed to Yemeni government's position and documents prove Houthi militia acts of torture, aggression and forcibly disappearance against journalists and opinion makers in their held-areas. He also talked about efforts of the government in normalizing conditions in liberated provinces.

"Your long history of defending journalist freedoms and freedom of speech- which has been aborted in Yemen since Houthi armed militia stormed Sana'a and overthrew the internationally recognized government- encouraged me to address you demanding your support and help….. for international solidarity for releasing journalists from Houthi militia's prisons and stopping all forms of torture and differing form of suffering they get in their illegal secret detentions," said al-Iryani.

He added that the government seeks for achieving inclusive and just peace to realize aspirations and hopes of the Yemeni people of permanent peace and stability and this will be achieved only by completing the Gulf Initiative, implementing the outcomes of the National Dialogue Conference agreed upon by all Yemeni parties including Houthis and also implementing international resolutions led by UN Resolution 2216.

He confirmed that the humanitarian situation in Yemen warns of imminent danger and rescuing Yemen from its ordeal is a salvation to the most important gate of the world before international navigation in the Red Sea and the Indian Ocean.
Meanwhile, UK Head of Yemen's Committee at the House of Common Kith Fas called for more representation of the government of Yemen to show its positions before British public opinion for supporting and defending it before the world.
"After killing former President Ali Abdullah Saleh, Houthis proved they do not accept partnership," said Peter Salisbury, a Senior Consulting fellow at Chatham House.

Salisbury believes that there are positive changes on military level will lead to more losses from Houthis and losing some military regions and that the control of the government and the Saudi-led Coalition on the ground will increase during the forthcoming six months, a matter which will help to reach to a solution.

" The GPC was forming a political cover to Houthis before Yemenis but Houthis lost this cover and become a police state no more and would find difficulty to convince the international community on the reverse," added UK Chatham House researcher.

"I do not envy Yemenis for they have to deal with Houthis for reaching a political solution and Houthis is the worst ever group Yemen has experienced," said a researcher in Yemeni affairs Helen Lakins.

"Yemen must remain united because the south will divide into four or five parts; Hadhramout wants to be alone, Mahra wants to be alone and Shabwa and Abyan want to be together for there is no strong and credible institution in the south."
She also confirmed that not all southern people support separation.