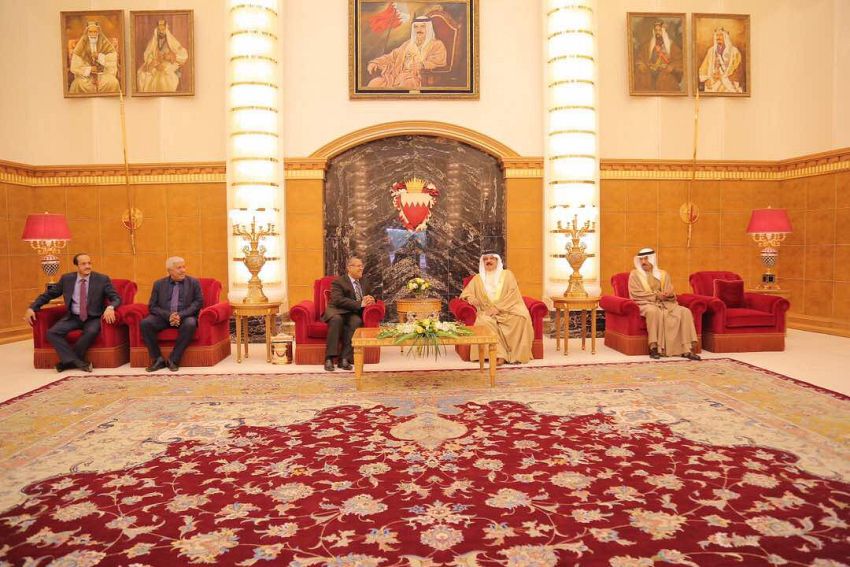 In the meeting, bin-Daghr valued Bahraini generosity saying:" I come to you carrying best wishes of President of the Republic AbdoRabbu Mansour Hadi and of the Yemeni people."
" {the position} of your soldiers, who stand behind their brothers from the Arab Coalition led by Saudi Arabia, with support of the United Arab Emirates and the rest of Arab Coalition countries, represents the most honest Arab brotherhood and through it they accomplish a historical battlefield toppled Iranian Plot of aspirations to take Yemen from Arabs," he added.

He confirmed that the Military Firmness Storm created new awareness to Arab even the leadership transferred to its Arabic origin led by the greatest sister (Saudi Arabia) which is waging the battlefield for defending all Arabs from East to West.

He valued support of brothers in Bahrain under King Hamad Al Khalifa for hosting big number of Yemeni laborers and facilitations they provide to Yemeni expatriates.

He noted that Iran committed a mistake in its calculations of exporting Khumaini revolution to Arab countries for destabilizing the region; it failed in Iraq and is failing in Yemen.

The ballistic rockets fired by Houthis on Saudi border and Mareb province are made in Iran and Iranian elements are training Houthi militias on their fire, he said.

For his part, King Hamad reaffirmed his country's support to Yemen and that their support to the legitimacy will not stop, noting that the future battle in Yemen will be development and construction.

Yemeni people are defending Arab and Gulf region and will win their battle, said King Al Khalifa.
"Yemenis have sacrificed themselves for defending Arabism as were the first to defend Islam, any Arabic, in general, or Bahrain will not allow the toppling of Yemen," he said.

He added that Yemeni-Bahraini relations are very old and when Yemeni people came to Bahrain they preferred to guard this country and protect its security and stability. "We are proud of this, many of our sons went for participation in Firmness Storm voluntarily and were supported by their relatives in proud participation for having active role for protecting Yemen."