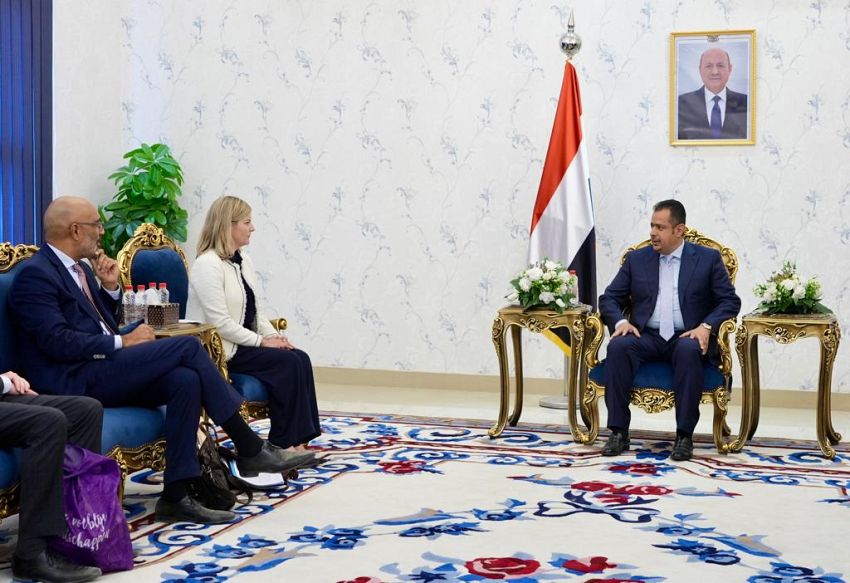 Aden – Saba
Prime Minister Dr. Maeen Abdulmalik received today, Friday, at the presidential palace in the temporary capital Aden the Dutch Minister for Foreign Trade and International Cooperation, Liesje Schreinemacher, and her accompanying delegation, who are currently visiting the city of Aden.

The Prime Minister and the Dutch minister held a session of talks with devoted to discussing the latest developments on the national arena, joint coordination on a number of issues, the Dutch positions in support of Yemen and its people, and mechanisms for developing future coordination to enhance cooperation in various fields.

Talks went over the Dutch support provided to Yemen in the development and relief aspects, and the existing coordination with the government to enhance humanitarian access to the needy, in addition to the existing UN brokered truce and the facilities provided by the Yemeni government for the entry of fuel to the ports under the control of the Houthi militia, and the militia’s continued truce violations and failure to implement the provisions of the truce agreement and the international pressure required in this regard.

They also discussed the risks of the deteriorating the situation of the floating oil tanker FSO off the shores of Ras Issa, Hodeidah Governorate, and joint coordination to complete the funding gap of the United Nations plan to implement the first phase of urgent emptying and maintenance of the tanker, in order to avoid a serious environmental disaster that that threatens to affect Yemen and surrounding the region in general in case of an spill of explosion of the tanker.

The Prime Minister welcomed the Dutch Minister and her accompanying delegation for their visit to the temporary capital, Aden, which is the first ministerial level visit from the Netherlands to Yemen since 2008.

He indicated that the visit implies important messages about the continuation and commitment of the Netherlands to support Yemen, and reminds the Yemenis of the leading development role their Dutch friends have been playing during the long decades of friendship and cooperation between the two countries.

He praised the generous and continuous support of the Kingdom of the Netherlands, which is friendly to Yemen and its people in the humanitarian aspect since the beginning of the Houthi ignited war in Yemen.

The prime minister noted the great keenness shown by the Dutch leadership to support efforts to address the problem of the Safer oil tanker, which represents an imminent threat to the environment, the economy and the lives of millions of people, not only in Yemen, but for all countries overlooking the Red Sea.

He also called for the inclusion of Yemen among the countries targeted by the European Center for Supporting the Products of Developing Countries, which in turn will give the agricultural sector and small and micro-enterprises in Yemen an opportunity to promote their products and develop their capabilities.

For her part, the Dutch Minister confirmed that her visit to Aden is a message of support for the Yemeni government and people in these exceptional circumstances and an affirmation of keenness to establish peace and stability.

The Dutch minister reiterated her country's support for peace in Yemen, transforming the existing truce into a permanent peace track, in addition to supporting the efforts of the UN envoy to advance the political process, stressing that Yemen holds promising opportunities and that peace is the only way to overcome the humanitarian catastrophe and achieve economic stability.