Hadramout Governor reports to Prime Minister about situations in the governorate 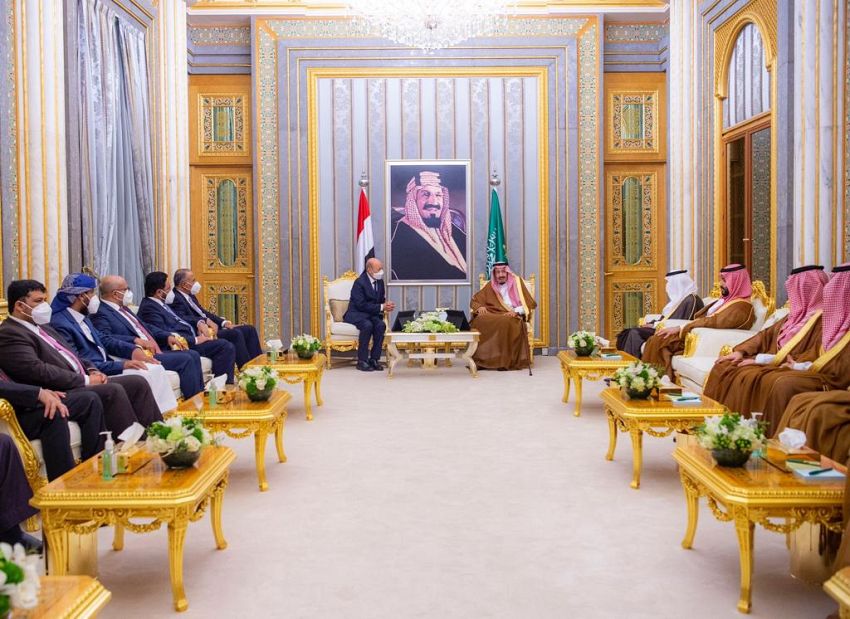 Jeddah-Saba
Custodian of the Two Holy Mosques, the King of Saudi Arabia Salman bin Abdulaziz Al Saud, in the presence of Prince Muhammad bin Salman, Crown Prince and Deputy Prime Minister and Minister of Defense of the kingdom, received at Al Salam Palace in Jeddah on Wednesday evening His Excellency President Dr. Rashad Muhammad Al Alimi, the Chairman of Yemen's Presidential Leadership Council, and his deputies.

At the beginning of the meeting, the President and Deputies of the Yemeni Presidential Leadership Council congratulated the Custodian of the Two Holy Mosques on the blessed month of Ramadan, praising the Kingdom's constant support for all efforts aimed at achieving peace for Yemen and the region.

His Excellency the President of the Presidential Leadership Council, Dr. Rashad Muhammad Al-Alimi, valued the great brotherly stances of the Kingdom of Saudi Arabia and its unlimited support for Yemen in various circumstances and stages.

He praised the Saudi economic support for the Yemeni economy within the constant and brotherly stances on the side of Yemen, and the importance of alleviating the human suffering caused by the Houthi coup militias.

His Excellency the President noted the strong Saudi support for the Presidential Council to carry out the tasks of the transitional period and to maintain the security and stability of Yemen, as this is an essential factor for the stability of the region from any extraneous projects.

His Excellency President Al-Alimi pointed to the requirements of the current and upcoming stage and the role that is dependent on the brothers in the Kingdom of Saudi Arabia to support this. During the meeting, the Custodian of the Two Holy Mosques, King Salman bin Abdulaziz, exchanged greetings with them on the holy month, stressing the Kingdom's keenness and support for the Yemeni Presidential Leadership Council, wishing them success, in order to achieve security and stability for Yemen and the Yemeni people. The Custodian of the Two Holy Mosques affirmed his keenness to support the security, stability and territorial integrity of Yemen.