PM, British Ambassador discuss factors for continuation of the truce 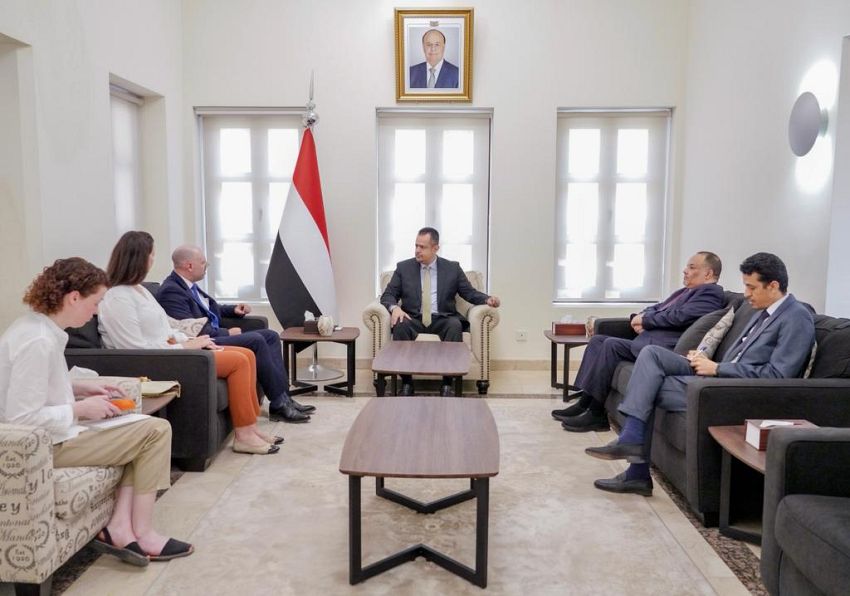 Riyadh – Saba
Prime Minister Dr. Maeen Abdulmalik Saeed discussed with the UK Ambassador to Yemen Richard Oppenheim the latest developments on the national scene, in light of recent developments and the announcement of the UN ceasefire truce for two months, which was widely welcomed at the regional and international levels.

The meeting touched on the necessary factors that entail the continuation of the truce and all related humanitarian and economic arrangements, in addition to the Yemeni-Yemeni consultations held in the Saudi capital, Riyadh, under the umbrella of the Gulf Cooperation Council, and the regional and international support required to support the government's efforts to achieve economic stability and alleviate the suffering of Yemenis.

The Prime Minister stressed that the ceasefire is the main element in the initiative submitted by the United Nations and approved by the government, and what can be built on in the economic, humanitarian, military and security aspects until reaching a comprehensive and sustainable political solution according to the three references.

He pointed out that the steadfastness of the ceasefire constitutes the main factor for the continuity of the truce and opening a new opportunity for the peace process, as well as the necessity of lifting the Houthi siege on the city of Taiz, which has been surrounded by the Houthi militia for seven years.

The premier indicated that the Yemeni-Yemeni consultations held under the umbrella of the GCC are an important and serious event that provides an opportunity to rearrange the priorities of the political forces in partnership with the government and the coalition to support legitimacy led by the Kingdom of Saudi Arabia, noting the discussions and the keenness shown by all political and societal forces and components for the success of the Riyadh consultations.

The Prime Minister reviewed the economic situation and the existing challenges in various aspects, and the government’s efforts to deal with them, and the need for Britain and the international community to provide more economic support to the government and strengthen the capabilities of state institutions to face challenges.