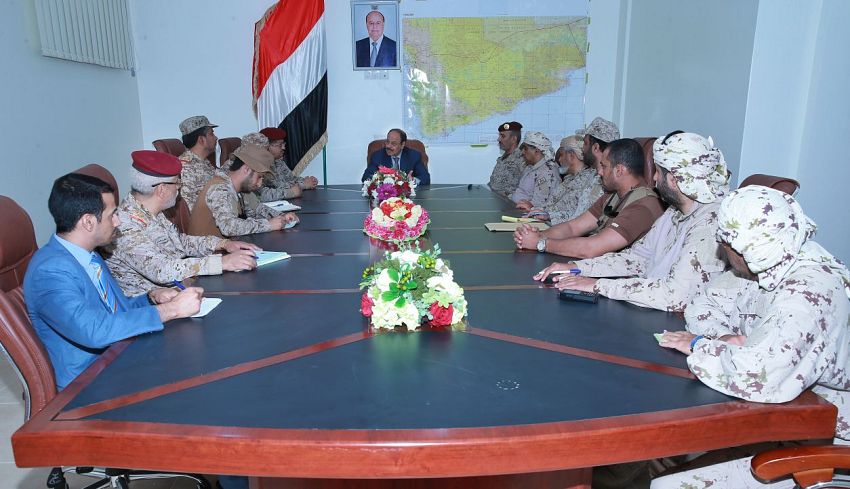 Vice President and Deputy Supreme Commander of the Armed Forces Lt. Gen. Ali Mohsen Saleh arrived in Marib, convened a meeting for the joint leadership of the national army and the Arab Coalition forces and discussed the latest developments in the military field and the ongoing efforts to normalize the situation.

The meeting, at the headquarters of the Joint Leadership in Marib, brought together the advisor to the President of the Republic, the Acting Minister of Defense Lt. Gen. Mohammad Ali Al-Maqdashi, the Inspector-General of the General Staff, Major General Adel Al-Qumeiri, the Assistant Minister of Defense Maj. Gen. Abd-Rabbu Al-Qushaibi, the commander of the Arab Coalition Forces in Marib Brig. Gen. Ali Al Anzi and the Commander of the UAE Force Brigadier General Ahmed Al Masabri.

The Vice President praised the sincere brotherly role of the countries of the Arab Coalition, especially Saudi Arabia and the UAE, in supporting Yemen's legitimate government. He stressed that Yemen and the Arab Coalition have foiled the plot to make Yemen end up in Iran's hands.

He pointed out that Houthis are not only targeting Yemen but are pursuing a project that threatens the security of Yemen and the region and seeks to undermine international peace and security.

He praised the national warriors' gains in Al-Beidha, Al-Jawf, Taiz, Meedi, Hodeidah and other fronts. He stressed that there is no hesitation to prevent dangers of Houthi, Al Qaeda and Daesh saying the government's goal is to eliminate all these terrorist projects.

He called for redoubling efforts to achieve positive results in the field and strengthen perseverance until victory is achieved.

For his part, Al-Maqdashi presented a summary of the situation on the different fronts and heroic performance of the army against the Iran-backed coupist militia.

The Commander of the Arab Coalition Forces welcomed the visit of the Vice President to Marib, stressing that the coalition will keep supporting the Yemeni people and its government.

The meeting also discussed the conduct of military operations and future plans to complete the liberation and restore the sought-for peace and prosperity throughout the country.