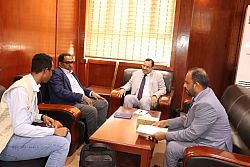 Argentina wins the 2022 World Cup after defeating France
The Argentine national team was crowned champion of the Qatar World Cup 2022 after defeating its French counterpart, by penalty shootouts, by four goals to two in the match that brought them together, this evening, Sunday, at Lusail Stadium, after the end of the original and extra time, in a positive tie with three goals for both teams.
Last Update: ، 2023/02/03 Time 12:28:10
Latest News:

RIYADH-SABA
The command of the Arab Coalition backing the internationally recognized government has announced that it will re-open Hodeidah Seaport for receiving emergency humanitarian relief aidand Sana'a Airport for the UN humanitarian flights as of Thursday 2017-11-23.

In a statement which the Saudi Press Agency (SPA) published the following statement from the command of the Coalition:
"With reference to the measures taken by the Coalition to Restore Legitimacy in Yemen in response to the Houthi Militia's launch of an Iranian-made ballistic missile, which was smuggled into Yemen, and used by the Houthis to target Riyadh, in the Kingdom of Saudi Arabia, the Command of the Coalition to Restore Legitimacy in Yemen announced today, Wednesday, November 22, 2017, that the relevant departments within the Command have completed a comprehensive review of the inspection and verification procedures used to implement the United Nations Security Council Resolution 2216, which prohibits the provision of weapons and military equipment to the Houthi militia and their supporters, who are using these weapons to sustain their military operations in Yemen.

As a result of this review, the Coalition decided to take the following steps:
1- The reopening of the Port of Hudaydah to receive urgent humanitarian and relief materials.

2- The reopening of Sanaa airport to UN aircraft, designated for humanitarian and relief efforts.

These steps will be implemented in accordance with the procedures approved by the Evacuation and Humanitarian Operation Cell (EHOC) starting at (1200) on Thursday November 23, 2017
Further, in continuation of the Coalition's commitment to stand with the people of Yemen, and to alleviate the humanitarian suffering caused by the Houthi militias, the Coalition will soon announce a comprehensive humanitarian operations plan that aims to provide assistance and relief to the Yemeni people, and to facilitate the delivery of food to all the governorates of Yemen.

These measure will be in accordance with the efforts by Coalition members to alleviate the suffering by the people of Yemen.

The Coalition Command also renews its call for the United Nations to urgently send a team of experts to meet with their counterparts in the Coalition to review and enhance the U.N's inspection and verification mechanism (UNVIM) in order to implement the best practices that will protect the people of Yemen, and facilitate the entry of aid and humanitarian shipments, while preventing the Houthi Militias from smuggling missiles to target neighboring countries."