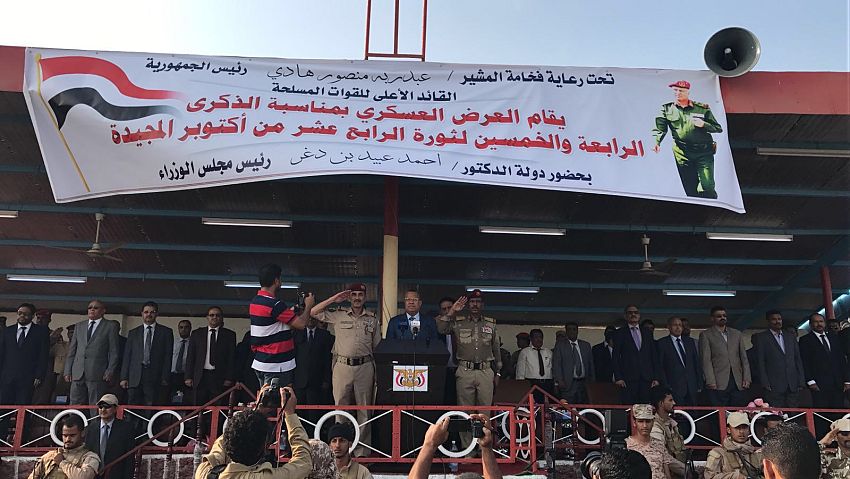 Prime Minister Ahmad Obeid bin-Daghr attended on Saturday a military parade held on Saturday at Military Academy at Salahaddin, Buraika District, Aden on the 54th Anniversary of the 14th of October Revolution.

" October Flag will continue to be high and blunt and Yemeni revolutions September and October will remain great and enemies will not be able to beat this revolution and September," said bin-Daghr in a speech he made on the occasion.

He added that they will keep the 22nd of May (the day of the unification)" within a new regime, we are making by our hands and with our consistence and wide participation from {good}future optimists, who see Yemen as great nation and the origin of Arabism and faith."

He confirmed the need to move forward in restoring the state, defending the legitimacy and raising the flag of the republic high, he said, adding "we will convince all our Yemeni people by peaceful means and by constructive dialogue and accepting others."

He highlighted the federal state as the project of President Abdo Rabbu Mansour Hadi and the project of all national forces as the safe wayout for our crises and the way for progress and the mean for freedom and justice.

"The union is strength and at the same time is democracy and extensive rights. It is the humanitarian experience which realized justice and kept the state and the people united," he said.

He noted that the federal state is the only acceptable solution on national, regional and international levels for stopping violence, protecting souls and saving bloodshed and it is the logical project for halting the destruction.

"Beware of falling the republic, beware any honest {leader} should continue support to the legitimacy, which is the title of the civil and federation state. We should all integrate to face Houthi- Saleh enemy, we should accept each other regardless of thought, political approach, party, system, flags and slogans," said Prime Minister bin-Daghr.

He called for discarding violence or mere thinking of dominating power by force as happened in Sana'a, as this is a big sin in international accords. "Yemen is for all of us, Aden is for us and we are with its locals in good and bad times."

He confirmed that Arab Coalition under the leadership of Saudi Arabia supports the constitutional legitimacy and the United Arab Emirates support the triumph and all Arab support the right of Yemen in rejecting and resisting the coup and beaten it, the international community and its international accords support us.