PM: Our conflict in Yemen has one prime cause; the coup 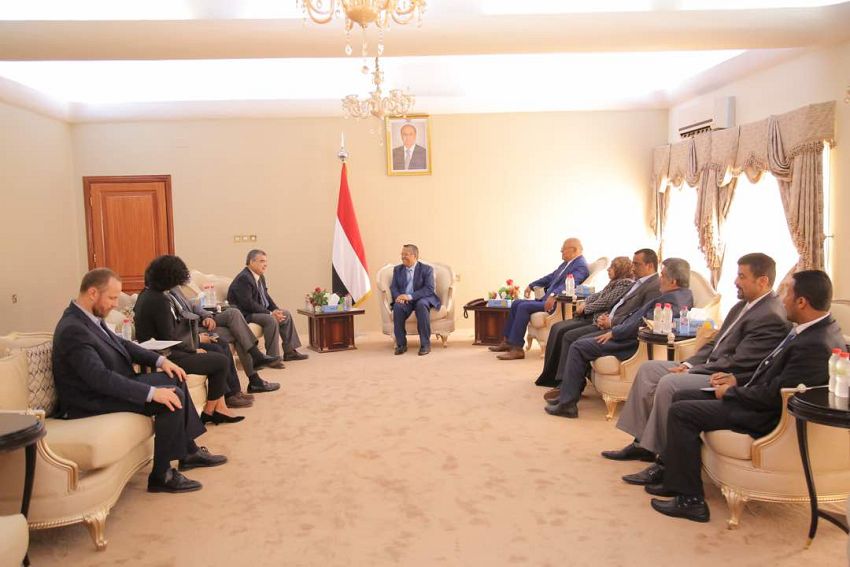 "Our conflict in Yemen has one prime cause; the coup against the legitimacy of President Abdu Rabbu Mansour Hadi, the Yemeni state and society," Prime Minister Ahmed bin-Daghr said on Monday.

He made the remarks in a reception meeting for the Assistant Secretary-General of the United Nations, Assistant Administrator of UNDP and Director of the UNDP Regional Bureau, Murad Wahba and the United Nations Development Programme Yemen Country Director, Mr. Auke Lootsma.

Bin-Daghr expressed hope that Wahba's visit will contribute in stepping up the UN's activities in the government controlled provinces. He said that the UN plays a crucial role in reducing the Yemeni people's suffering stemming from the coup d'état by the Saleh-Houthi militias.

He welcomed the UN's intended projects in Yemen including the projects of local governance and demining government-held areas.

"The government institutions were operational, life was going fine. But the war that the militias launched from Saada with Iran's wreaked all this havoc across Yemen," he asserted.

He told the UN officials that the government is already assisting people whose houses were damaged in the war and has set out to reconstruct some houses in downtown Aden. "But reconstruction requires huge funds and the government is pinning its hopes on the international community's support."

He renewed the government's demands for the international organizations to relocate their premises to the temporary capital Aden, where they will be able to operate freely and smoothly.

He said that the militias "bear full responsibility for the deteriorated conditions of living of the people." "While the people are starving , the militias continue to trick the employees out of their salaries with (meager) foodstuff coupons."

He said that "the political leadership is for just lasting peace, the peace that the Houthis themselves, the Southern Movement and all other national stakeholders had agreed to, in accordance with the three relevant references." He said that the militia-sought settlements outside the references will only deepen the crises and prolong the war, which they will bear the responsibility for.

"The government stands by the side of the UN Envoy Ismaiil Ould Cheikh and supports his steps. Peace is Yemen's main cause. And it is not fair of the UN to put up with what the coup has inflicted. Especially as the UNSC resolution no. 2216 was designed to reject the coup and to restore the confiscated (Yemeni) state."

Wahba affirmed the international community's commitment to support the government as per the UNSC resolution.
He said that his visit to Aden is meant to inspect the works of the UNDP office, coordinate support for Yemen's Central Bank and to assist Yemen in raising awareness about the danger of war explosive ordinances left by the war.