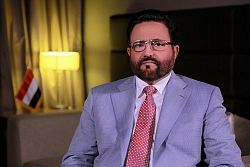 Jizan – Saba
Defense Minister Lieutenant-General Muhammad al-Maqdashi visited the headquarters of the Joint Forces Command in the Jizan region of the Kingdom of Saudi Arabia, and discussed with the leadership of the Arab duty forces the aspects of cooperation, support, and logistical, operational and informational support provided by the Joint Forces Command to their brothers in the Yemeni armed forces.

During the visit, in which he was accompanied by the Governor of Hajjah Governorate, Major General Abdul Karim Al-Sunaini, and was received by the Commander of the Jizan Force, Major General Sultan Al-Dajani, the Minister of Defense reviewed with the commanders the field situation along the theater of combat operations.

He conveyed to them the greetings of the political leadership represented by the President and members of the Yemeni Presidential Leadership Council. He appreciated the stances of the brothers in the leadership of the Coalition to Support Legitimacy led by the Kingdom of Saudi Arabia and the United Arab Emirates, and their fraternal stances alongside the Yemeni people, their leadership and armed forces, and their support in the military, political, economic and humanitarian fields.

The meeting focused on the ongoing Houthi violations of the UN armistice, its repeated attacks on army sites, residential neighborhoods and civilian objects, and its serious threats to Arab national security, global interests, and international shipping lanes, with the continued smuggling of weapons and Iranian support for its Houthi militia to implement terrorist projects in the region.