Symposium in Marib calls for alignment around the Presidential Leadership Council 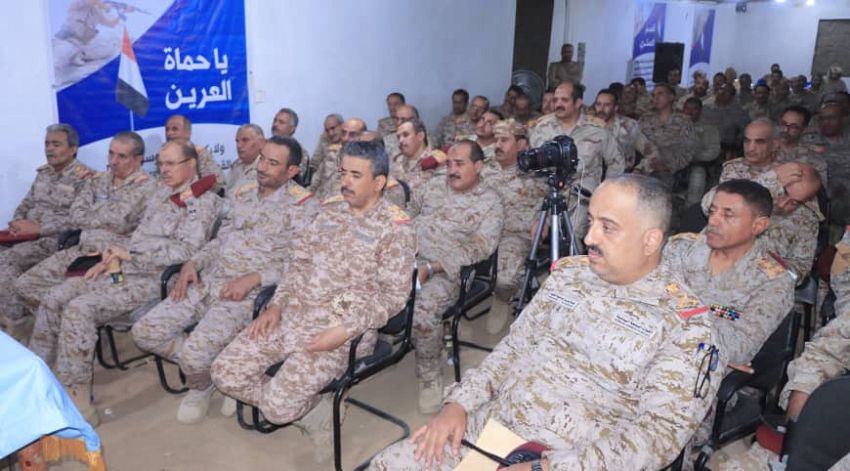 Marib – Saba
A symposium was held in the city of Marib, entitled “National alignment around the Presidential Leadership Council, the path to achieving peace, security and stability for Yemen”, in the presence of the Chief of the General Staff, the Commander of Joint Operations, Lieutenant-General Saghir bin Aziz, and a group of preachers, led by the Deputy Minister of Endowments and Guidance Sheikh Hassan Sheikh.

The seminar, which was organized by the Department of Moral Guidance, presented three working papers, stressing the importance of sensing the historical moment and unifying the efforts of all Yemeni political, social and intellectual forces and components around the political leadership represented by the Presidential Leadership Council as the most appropriate and nearest way towards restoring the state and achieving comprehensive and just peace for the country .

The Chief of the General Staff delivered a speech in which he conveyed to the attendees the greetings of the political and military leadership represented by His Excellency the Chairman of the Presidential Leadership Council, Dr. Rashad Al-Alimi, stressing the importance of such awareness seminars that would enhance adherence to national constants and alignment behind the political leadership to achieve peace, security and stability for Yemen.

Lieutenant-General bin Aziz noted the role of scholars, preachers and guides in spreading national awareness and cooperating in the interest of work and the homeland and for everyone to perform their duties towards the homeland and the people.