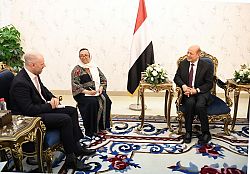 President al-Alimi confirms significance of UK support to Yemen's economy
President of the Presidential Council Rashad al-Alimi received Monday here UK Ambassador to Yemen Richard Oppenheim, who convoyed a written congratulation from Queen of the United Kingdom Elizabeth the Second on the 32nd of the National Day. 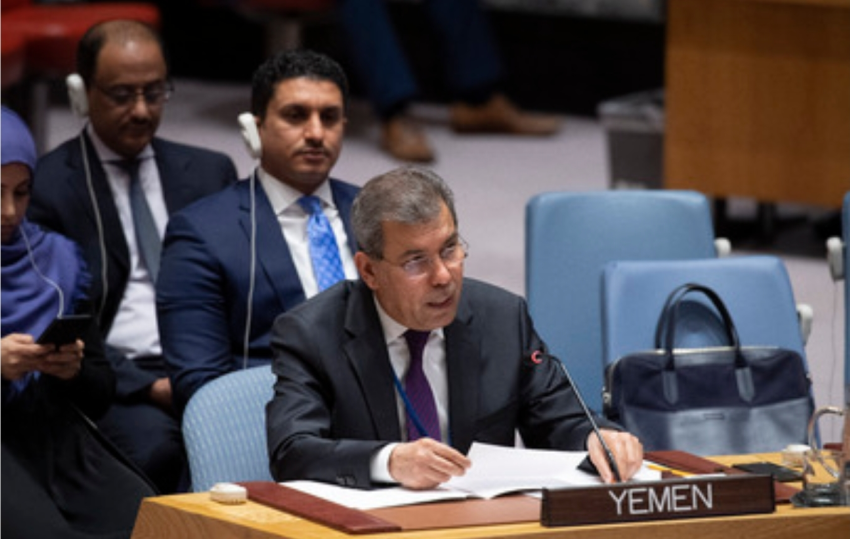 NEWYORK- SABA
The Yemeni government said it has been very keen to comply with Stockholm Agreement, reacted constructively to all calls and initiatives over the past five years aimed to make peace and end the Yemeni peoples' suffering, but unfortunately the upshots on the ground clearly indicate that Houthis are not interested in honoring its provisions.

Addressing the open session of the International Security Council about Middle East held Thursday in New York Assa'di affirmed that the Yemeni government headed by President Hadi has continued to seek to put an end of the war imposed by Houthi militia since 2014.

He stated that the main objective the Yemeni government has been seeking for is to achieve the fair, comprehensive and sustainable peace that is based on the three terms of reference including the GGC' Imitative, its executive mechanism, outcomes of the National Dialogue and the USCRs in relevant, namely 2216.

Assa'ad noted that to realize peace, the government has provided the Special Envoy of the UN Secretary General to Yemen Martin Griffiths with all possible support, offered concessions, reacted positively to peace options and proposals.

" We extended our hands for peace, dealt flexibly with peace options, made a lot of concessions to preserve our war-stricken country and our hands are still extend, but unfortunately Houthi militia has continued to refuse to come to peace, insisting on more wars and destruction, further worsening the Yemenis' ordeal", said Assa'ad.