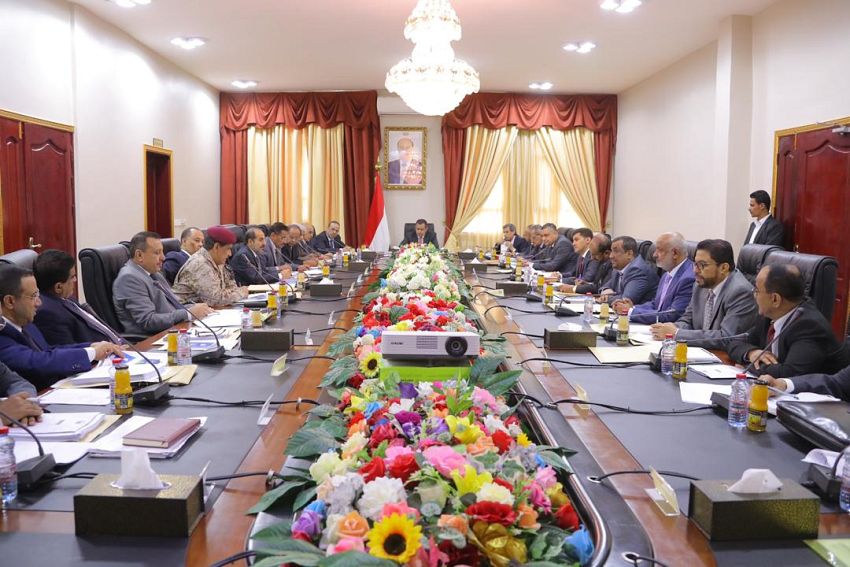 A number of significant political, economic, military, security and development issues were addressed.

The Prime Minister reiterated the government's support for the good offices have been made by the UN Special Envoy to Yemen Mr Martin Griffiths, welcoming the recent UN resolution 2452 about establishing UN mission to support the agreements about the Seaports of Hodeidah, al-Salif and Ras Issa in accordance with Stockholm's Agreement.

Dr Ma'een also reiterated support for the Redeployment Coordination Committee's action aimed to oversee the cease-fire, redeployment of armed forces and de-mining process in the governorate.

The Prime Minister also reiterated the legitimate Yemeni government's reservation about the outcomes of the meeting organized Wednesday by German Foreign Ministry in Berlin under the so-called" High Level Strategic Dialogue about Peace and Prospects of Stability in Yemen because it was occurred without consultation and coordination in advance with the internationally recognized Yemeni government as a representative of the Republic of Yemen.

The Cabinet voiced its condemnation of Iran-backed Houthi militiamen's attack against the motorcade of the Chief of the UN Redeployment Coordination Committee General Patrick Cammeraet in the city of Hodeidah, firing live-bullets on his convoy, intercepting his motorcade in a bid to prevent him from convening a session with the government's team within the joint-committee that Houthis are refusing to participate in, forcing him to wait for long hours.

The Council of Ministers heard a report by the General Chief of Staff about ongoing combat operations in battlefields of Karish, Swerwah, Nehm fronts and others.

The Deputy Premier , Minister of Interior reported to the Cabinet about the findings the Ministry of Interior found out about terrorist cells operate under the names of ISIS and al-Qaeda with the aim of disturbing security and assassinating senor government's officials. The minister stated that the Ministry has obtained solid evidences indicating that these terrorist cells employed by Iran-allied Houthi militia.

The Council of Ministers has approved our country's joining to the UNISCO agreement about banning illegally importing cultural properties of 1970. Since it is important to preserve antiquities and protect cultural assets.

The Cabinet also has endorsed the outcomes of the meetings of Minister of Planning and International Cooperation and his accompanying delegation with official of Kuwaiti government , Kuwaiti Fund for Development and Arab Fund for Economic Development.

The governor of Hodeidah also reported to the Cabinet about the situations in the province, challenges need to be managed.