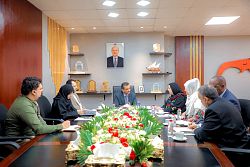 Argentina wins the 2022 World Cup after defeating France
The Argentine national team was crowned champion of the Qatar World Cup 2022 after defeating its French counterpart, by penalty shootouts, by four goals to two in the match that brought them together, this evening, Sunday, at Lusail Stadium, after the end of the original and extra time, in a positive tie with three goals for both teams.
Last Update: ، 2023/01/30 Time 02:46:20
Latest News:

The World Bank (WB) has announced Friday that it approved a new project aimed to restore basic services in Yemeni cities that have been seriously affected by armed conflict.

The new project financed through grant estimated at $150 million dollar provided by International Development Foundation, which is the (WB) Fund aims to help world's poorest nations to cope with challenges such as lacking clean drinking water, sanitation, electricity and highways networks.

This project is intended to sustain 1.4 million of Yemenis 50% of them nearly women. UN Office for project services shall carry out the project in cooperation with three well-established Yemeni institutions: Public Works Project, Highways Maintenance Fund, Unit of Managing Water Projects in Urban areas.

The Project is designed to provide 600,000 of Yemenis with basic services of water, sanitation and rehabilitate 400 km of highways, generate 60,000 MGW of electricity and some 1.5 million work-days.

This funding brings total amounts of emergency grants offered by International Development Foundation to Yemen up to $1.133 since July 2016.