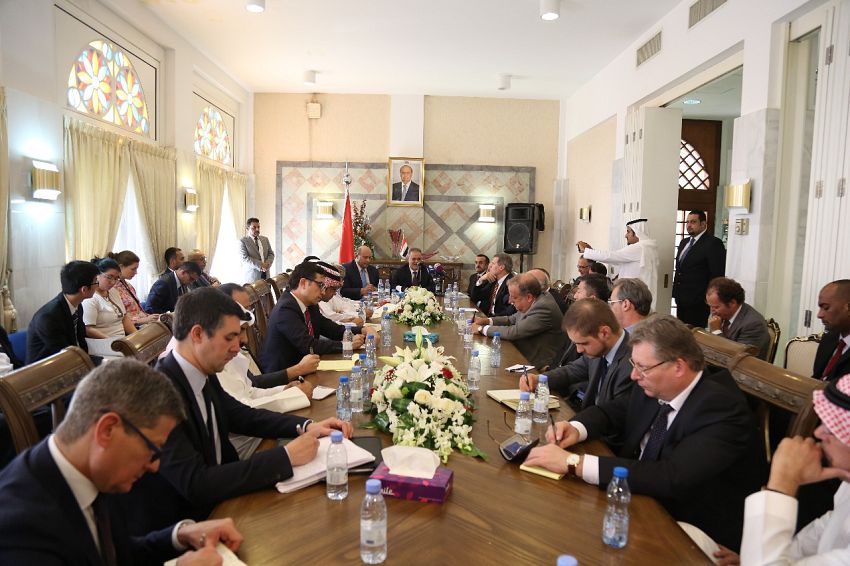 RIYADH-SABA
Foreign Minister Abdul-Malik al-Mekhlafihas called on the international community to look "with two eyes not one" at what is happening in Yemen.

Addressing the ambassadors of the G18 countries sponsoring peace in Yemen during a meeting in Riyadh on Monday, he said: "It is regrettable that there are members of the international community who look at Yemen with one eye, in order not to see the tragedy of Taiz."

"The people of Taiz have been under a siege laid by the Saleh-Houthi militias since August of 2015. They get killed everyday as the militias' tanks and heavy artillery keeps shelling the city's neighborhoods snatching the lives of innocent people, mainly children and women."

He said that the militias continue "the en mass recruitment of child fighters by persuading the children's relatives, tricking children into mobilization camps and inciting them in mosques and schools (to join the battles)."

In the period from January to May 2017, a large number of minors were conscripted by the militias, he said.

He cited the call by a militia leader, Hassan Zaid, a couple of days ago to "close schools"and send the hundreds of thousands of freed schoolchildrenwith their teachers to the warfronts.

He said that "in the January to May 2017 period alone, 440 persons were reported to have been killed by the Houthi militias. Of them 78 were children, 35 women and seven media bandits."

He regretted the UNICEF's involvement in financing the printing of school textbooks altered by the radical militias to introduce "sectarian and violence glorifying content." He warned that the curricula will instill extremist ideology to the new generation and make them terrorists.

He said: "Regrettably the UNICEF financed the printing of the altered textbooks and omitted financing the printing of the [wholesome] textbooks in the government-administered areas. A precedent and a violation that threatens the future of the coming Yemeni generations and destroys the social fabric." he said.

He said that the teachers in the rebel-held territories "have staged strike because of the curricula changes and the non-payment of their salaries."

As for the salaries, he said: "The Government is working to pay the public salaries in the liberated areas and pays the overhead budgets. It also pays the salaries of the judicial authority employees even in rebel-held areas to keep the courts working so that the justice system does not collapse."

He said: "The Houthicouper authorities work to collect revenues, 70% of the non-oil revenues, but refuses to pay the salaries of the employees. This is not merely a claim that the government makes, but their coup ally, the Saleh party, confirm this fact."

He said that "two months gave passed since the closure of schools in Sana'a and other rebel-controlled areas over the non-payment of salaries. And that (non-payment) is meant to push the students and teachers to join the fight."

He called for addressing the wretched humanitarian conditions and facilitating the access of people to humanitarian aid.

The meeting indicated that the status quo, as a consequence of the militias' insurgency and weakening of the government led to the growth of terrorism.

The meeting praised the government's efforts to combat it and confirmed the support of the G18 countries to Yemen in this respect.