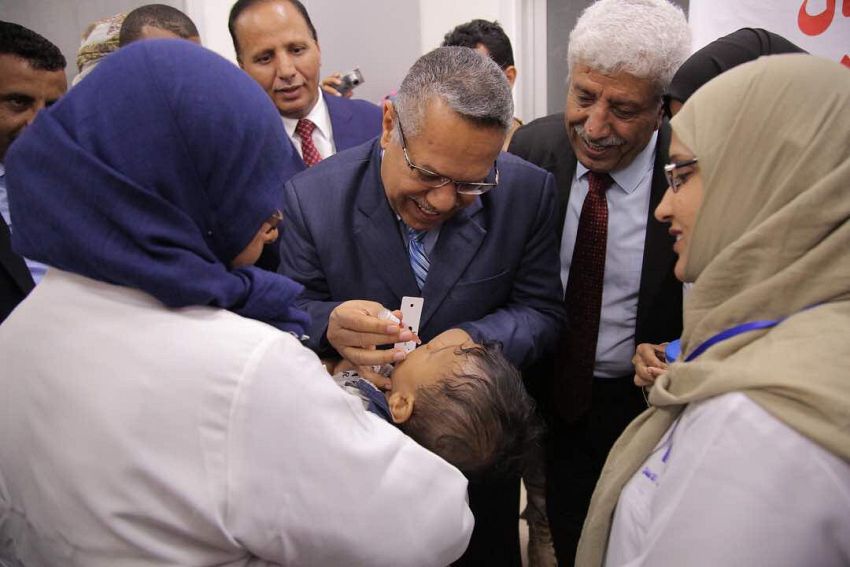 "In accordance to directives of President Hadi, who pays special attention to health sector, house- to- house National Campaign for Eradicating Polio have been carried out across the country's provinces," said bin-Daghr.

He praised great efforts exerted by Ministry of Public Health and Population and all the ministry's offices across liberated provinces for providing health care despite difficult conditions in the country.

While he confirmed significance of the campaign for protecting children against diseases, he valued assistances provided by King Salman for Relief and Humanitarian Assistances, the UAE Red Crescent, the World Bank's group, WHO, UNICEF, USAID, the International Vaccination Alliance and the International Committee for the Red Cross.

He hoped continuation of support to health sector for its significance, especially under Houthi-Saleh militias' war.

For his part, Minister of Public Health and Population Naser Ba-Om confirmed the significance of the campaign for eradicating polio and children nutrition campaign for protecting children against diseases.

The campaign targets more than five million children under five years and carried out by 5300 team members and covers all the republic provinces, said Ba-Om, praising efforts of health cadre, especially those who work in rebel-held areas for obstacles they face.