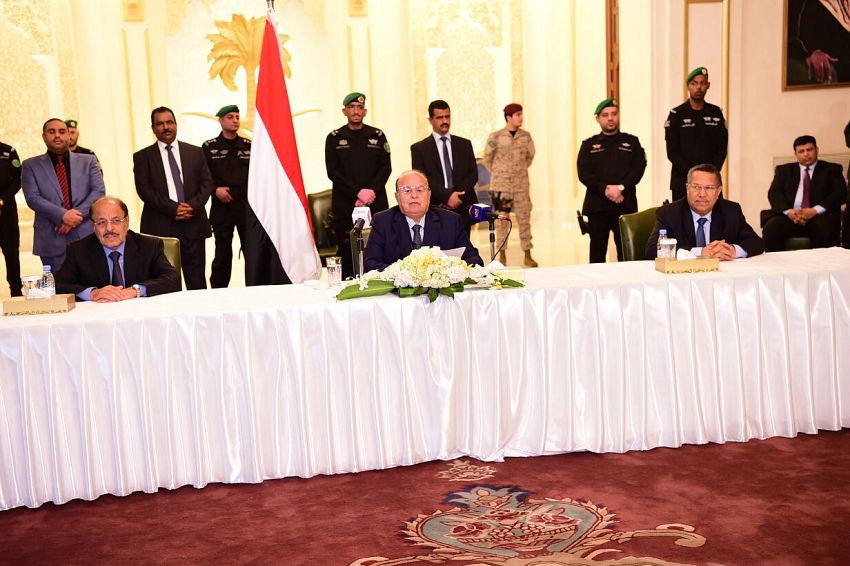 " Remember, our greatest party and doctrine is Yemen, which gathers us all with our different spectrums, and our enemy is one; the rebellion, its militias, persons and those who are around them," said President Hadi in a meeting with political leaders, state men, government officials, tribe leaders and dignitaries held here Monday.

In the meeting attended by Vice President Ali Mohsen Saleh and Prime Minister Ahmad Ubaid bin Daghr, President warmly welcomed the attendants, especially those who arrived from battlefields, highlighting their efforts for fighting for defending Yemen, which will never be a dwelling to Persians or to any new thought harming tolerant and moderate Islam Yemen has adopted along history.

He explained to the attendants the stages of Yemen's crisis started by Houthi-Saleh's rebellion with Iran's support against Yemen for targeting the whole region. It is a coup against the Southern Movement's peaceful struggle, against Peaceful Youth Revolution, which ended the family project and Saleh and his sons' dream of owning Yemen… it is a rebellion against the Gulf Initiative, the National Dialogue Conference's outcomes… it is an overthrow against the draft constitution, which reflected the NDC's outcomes.

"This is the real coup carried out by the three evil triangle and their relatives Abdulmali al-Houthi, Ali Saleh and Ahmad Ali Abdullah Saleh, who financed the coup," he stressed.

He reviewed his efforts in honoring his commitment on defending the project of Federal Yemen stated in the constitution draft as a just solution for power and wealth partnership and realizing justice and security and stability.

He reminded them, how he accepted this duty in difficult conditions and sacrifices he made during that dangerous time when Houthis arrested him inside his house, chasing him to Aden; bombing his residence in Presidential Place by the war jets and then by military incursion which forced him to flee to Oman. He also reminded them of concessions the government made during Kuwait Talks for the sake of peace and to stop bloodshed but faced by Houthi-Saleh's rejection.
He directed four messages;

The first one to Yemeni people, the first part of it is to citizens who suffer miserable economic conditions as aftermaths of the coup, greeting them and assuring them of overcoming the ordeal. The second part was directed to the attendants arguing them to unify efforts, join the army, restoring the state and build it, social integration and to be in a state of alert until they liberate every small part of the country from the rebels.

He directed the second message to the Arab Coalition led by King Salman and his brothers, thanking them all for their efforts supporting Yemen. " You presented the most valuable you have, your youth, whose blood merged with blood of our best youth for protecting Arabism and Yemen people will never forget that."

He directed the third message to martyrs, injured and heroes in the battlefields. He renewed to them all his commitment to keep joint approach and "not to betray your blood and sacrifice and not to forget your families and children and you will remain a banner for sacrifice and redemption."

He concluded his speech by directing the fourth message to the international community, reaffirming desire of peace and stop the war, as well as ending the coup on the bases of the three references; the GCC Initiative, NDC's outcomes and the UNSC's resolutions led by Resolution No. 2216 " fully, no increase nor decrease and without deviation or distortion."